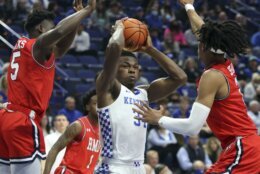 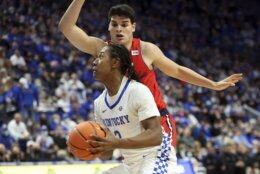 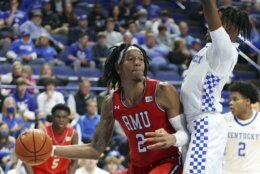 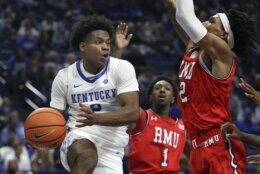 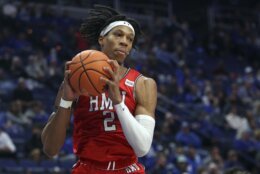 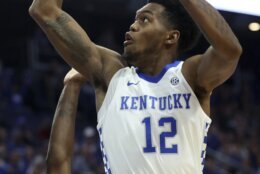 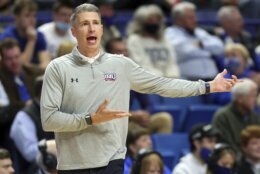 LEXINGTON, Ky. (AP) — Oscar Tshiebwe’s zeal for rebounding is obvious, to say nothing of his energy.

No. 10 Kentucky fed off both qualities for a resounding 100-60 victory over Robert Morris on Friday night.

Tshiebwe had 20 rebounds and 14 points, and Kellan Grady had 19 points, including four 3-pointers. Daimion Collins went 7 of 8 for 14 points and had a couple of highlight-reel dunks late in the game for Kentucky, while Keion Brooks Jr. and Davion Mintz added 13 points each and TyTy Washington had 10.

“That’s how (Kentucky coach John Calipari) coaches us,” Collins said. “Everything starts on the defensive end. We played great defense, and everything on the offensive end is going to work.”

Tshiebwe had a big hand in the Wildcats’ success.

The West Virginia transfer continued to establish a physical presence on both ends with another 20-rebound performance, along with making 5 of 11 shots and blocking three shots. He grabbed Kentucky’s first five rebounds, and had several offensive boards that he converted to second- or third-chance baskets.

“That’s what I’m here for. I want to do big things,” said Tshiebwe, who had 10 rebounds on both ends. “I didn’t come here to have fun. Of course, we’re going to have fun, but I came in to be a warrior, to help this team and take them as far as we can.”

Tshiebwe’s rebounding prowess through two games is the most by a Wildcat in his debut season, and ESPN Stats & Info says he is tied with Louisiana Tech’s Paul Millsap for the most offensive rebounds (22) in a two-game span over the last 25 seasons.

So far, his teammates are amazed.

“I’ve never played with a guy like Oscar, who wants to rebound more than he almost wants to live,” Mintz said. “That’s all he talks about. In film (sessions), I hear mumbling in the back, ‘they can’t stop me, they won’t rebound.’ … I’ve never heard a guy like, really, really have a hunger to rebound.”

Sahvir Wheeler had 12 of Kentucky’s 24 assists. The Wildcats committed 10 turnovers, three fewer than they had against Duke. The difference this time was that Robert Morris managed just nine points off those mistakes while Kentucky scored 23 off 14 turnovers.

Kentucky won the opener of the four-team Kentucky Classic that includes Mount St. Mary’s and Ohio.

After managing just one foul and one turnover in 1:25 against Duke, Daimion Collins played longer and stronger against the Colonials. Besides his hot shooting, he added six rebounds, four blocks, three assists and a steal.

Robert Morris: Made a couple of early 3s to stay within a couple of possessions but couldn’t match Kentucky’s intensity or aggression.

“As well as they were shooting the ball with the combination of Oscar in the middle,” coach Andrew Toole said, “it just puts too much pressure on your defense and your offense, to be honest to find any kind of success.”

Kentucky: Steadily established a flow before exploding for a 12-2 run late in the first half. At times, the Wildcats appeared toy with Robert Morris for a triple-digit effort that was hard to achieve last season. They outscored the Colonials 46-24 in the paint and 39-20 in bench points.

No. 21 Georgia women ease past UNF behind Staiti, Morrison

Smith has 9th double-double in row for No. 5 Baylor women