STARKVILLE, Miss. (AP) — Iverson Molinar tossed in 15 points, Shakeel Moore scored 13 and the pair combined to spark an 8-0 run to open the second half as Mississippi State pulled away for a 66-46 victory over Morehead State on Sunday.

Moore hit a jumper to open the second half, Molinar followed with a three-point play before Moore buried a 3 as the Bulldogs (4-0) scored the first eight points to turn a 29-28 halftime lead into a 37-28 advantage with 16:15 left to play. The Eagles (2-3) never got closer than six points the rest of the way.

Molinar sank half of his 14 shots, adding seven rebounds and six assists for Mississippi State. Moore was 3 for 6 from beyond the arc as the Bulldogs shot 38.5% from distance. D.J. Jeffries, a junior transfer who played two seasons for Memphis, finished with 13 points and 10 rebounds for his first double-double as a Bulldog. Garrison Brooks scored 11 with six boards.

Tray Hollowell was the lone Eagle to reach double figures, scoring 10. Morehead State shot 40% from the floor in the first half and hit 6 of 13 from distance. The second half saw the Eagles shoot just 26% overall and they made only 2 of 12 3-pointers. 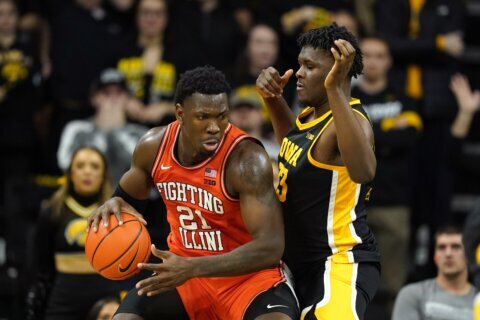