RALEIGH, N.C. (AP) — The top-ranked South Carolina Gamecocks sure looked ready for their marquee season-opening matchup of Final Four contenders. They got off to a quick start, played with composure to protect the lead and never let fifth-ranked North Carolina State look comfortable.

The Gamecocks scored the first six points and had a response any time the Wolfpack tried to make a move. Cooke paced an offensive team effort that shot 49%, while preseason Associated Press All-American Aliyah Boston controlled the paint and helped shut down Elissa Cunane — N.C. State’s star and the preseason Atlantic Coast Conference player of the year.

“I thought we came in just well-prepared,” Gamecocks coach Dawn Staley said. “We didn’t know how many points we were going to be able to score because of what they were going to do as far as sagging (inside). So we just had to make sure that we locked down.”

Raina Perez and Jakia Brown-Turner were the only Wolfpack players to find any rhythm, each finishing with 18 points. Cunane finished with eight points on 4-for-11 shooting with three rebounds despite failing to hit a basket until the third quarter — a major problem for an offense that relies on her as the interior presence surrounded by capable shooters.

“That’s why they’re No. 1 in the country,” Wolfpack coach Wes Moore said. “They just really defensively took us out of anything. We looked very lost out there most of the night.”

The Wolfpack got within a point three separate times in the third quarter, the last coming at 37-36 on Brown-Turner’s baseline drive. But South Carolina countered by scoring on five straight possessions and seven of eight to end the third quarter.

The Gamecocks went on their finishing kick early in the fourth, with Cooke knocking down a transition 3-pointer near the South Carolina bench to push the margin to 51-41 with 7:57 left. Destanni Henderson (14 points) added a jumper with the shot clock winding down, then Boston scored inside against Cunane while being fouled for a 55-41 lead with 4:51 left.

“We just wanted to come in with a great mindset and just trust each other and play hard throughout four quarters,” Henderson said.

South Carolina: All 11 members of the Gamecocks’ Final Four team returned this year, and the team added yet another stellar recruiting class under Staley, who recently received a seven-year, $22.4 million contract that makes her the sport’s highest-paid Black head coach and one of the highest overall. It increases the expectations on this perennial power, which was playing its highest-ranked season-opening opponent ever –- not to mention a team that had beat the Gamecocks on their homecourt last year.

N.C. State: Moore’s program entered the season with its highest expectations in recent memory with the return of the top eight scorers from a two-time ACC Tournament champion that went on to earn the program’s first No. 1 seed in the NCAA Tournament. N.C. State got limited work from Kayla Jones, who came off the bench in her recovery from knee surgery, and is without Jada Boyd due to a hand injury. Moore said the team is “still a work in progress” when it comes to blending in new transfers Diamond Johnson (Rutgers) and Madison Hayes (Mississippi State).

“Probably not a great night to play the No. 1 team in the country,” Moore said.

Johnson had a bumpy start to her N.C. State tenure. After averaging 17.6 points last year, she scored four points on 2-for-12 shooting and missed all six 3-point tries.

Syracuse transfer Kamilla Cardoso (6-7) and junior Laeticia Amihere (6-4) made things difficult inside for the Wolfpack alongside Boston. Cardoso finished with two points and four rebounds while Amihere had nine points and five boards, helping South Carolina finish with a 35-30 rebounding edge. 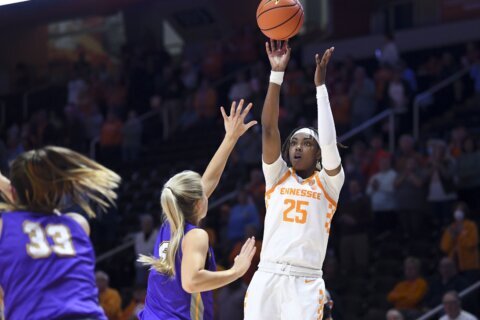