Jack Ferguson and Nelly Cummings each hit six 3-pointers, Ferguson finishing with a career-high 25 points, and the Raiders beat Syracuse 100-85 on Saturday night to snap a 54-game losing streak to the Orange.

Cummings finished with 18 points and seven assists, Oliver Lynch-Daniels added 12 points, while Jeff Woodward was effective inside against the Syracuse zone with 10 rebounds and nine points.

“Our team is built offensively to take what the defense gives us,” Colgate coach Matt Langel said. “We have a bunch of guys who have made a lot of 3-point shots in their careers.”

Syracuse (2-1) was 127-45 versus Colgate coming in with its last loss to the Raiders in 1962. And in this 173rd meeting, the most for Syracuse against any opponent, it looked like the Orange were on their way to making it 55 straight with a fast start before Colgate started pouring in 3-pointers to go up 46-43 at halftime.

The Raiders fell behind 16-2 to start the game after missing 11 3-pointers and were behind 22-5 with 13 minutes left in the half when they started hitting from distance, making 10 of their last 14 from the 3-point line.

“Getting preparation for the second half, the group was really ready, get some passes towards the basket, some cuts towards the basket,” said Langel, a three-time Patriot League coach of the year who has led the Raiders to the NCAA Tournament the past two years. “We just kept grinding and grinding in hopes of making some of their shots a little bit harder.”

The Raiders, who nearly defeated North Carolina State a week ago, losing 77-74 when the Wolfpack sank three free throws in the final two seconds of regulation to escape, clung to their lead in the second half. Woodward had a block and then a free throw and bucket that began a 7-0 run for a 91-79 lead with 2:11 left, and the lead was a safe 14 points after an all-alone dunk by Keegan Records and two Lynch-Daniels free throws.

Perhaps emblematic of the night was Cummings’ hurried 3-pointer as the shot clock ran out for Colgate’s 100th point.

“Everybody had a piece of that. It wasn’t one guy,” Orange coach Jim Boeheim said. “When you play a team with that many good perimeter shooters, you’ve got to get there, and we didn’t get there.”

The Orange had trailed Drexel by a point at halftime in their previous game but won going away, 75-60. There was no answer on this night.

“We’ve got a lot of things to work on,” said Syracuse guard Buddy Boeheim, who scored 19 points but only four in the second half. “We’ve got to work on this, but it’ll be a good wake-up call for us.” 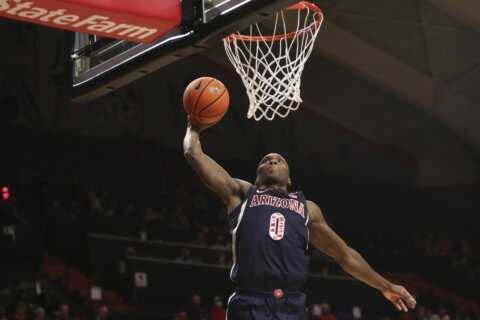 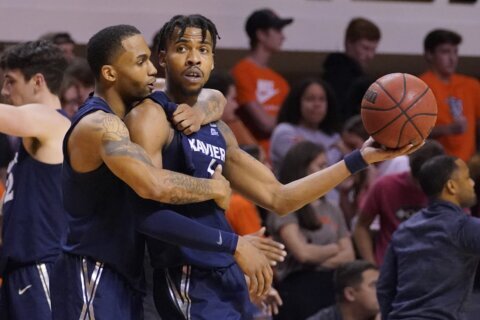