IOWA CITY, Iowa (AP) — As Caitlin Clark struggled to make shots, she focused on other things she could do for No. 8 Iowa.

Clark had 16 points, 10 rebounds and 10 assists for her second career triple-double, McKenna Warnock had 15 points and 11 rebounds, and the Hawkeyes beat Southern 87-67 on Wednesday night.

“For me, it’s important to find other ways to impact the game,” Clark said. “Any time you get a triple-double it’s pretty special. Definitely pretty challenging.”

Clark had a hard time getting open in the half-court offense because of the physical play of Southern, so her goal was to get Iowa’s transition game going by chasing rebounds.

The sophomore guard who was an Associated Press preseason All-American shot 2 for 9 from the field — including 1 for 6 on 3-pointers — but made 11 of 12 free throws.

Monika Czinano added 16 points and seven rebounds, and Tomi Taiwo scored 12 for the Hawkeyes (4-0). Czinano, who led the nation in field-goal percentage last season, was 6 of 8 from the field despite going scoreless in the first quarter.

Warnock, who opened the game with a 3-pointer, had eight points in Iowa’s 14-3 run over the first 3:05 of the game. Warnock had four offensive rebounds among her seven rebounds in the second half, responding to a challenge Bluder gave her at halftime.

“We just knew we didn’t show our best half (in the first half),” said Warnock, who got the 10th double-double of her career. “At halftime, Coach Bluder was hard on us, as she should be.”

“I think the game would have been pretty close if we weren’t making free throws like we should have been,” Clark said. “That’s where most of our points came, especially in the first half.”

“Thank goodness for the free-throw line,” Bluder said. “We got there a lot, and we made a lot. It’s one thing to get there, it’s another thing to make them. And we made them.”

Iowa led 33-21 at the end of the first quarter and 55-37 at halftime. The Hawkeyes have had an average halftime lead of 20.5 points in the first four games.

Bluder picked up her 799th career win. Bluder, in her 22nd season at Iowa, can become the 14th NCAA Division I coach to reach 800 wins on Sunday against Drake. Bluder was Drake’s coach for 10 seasons before coming to Iowa.

“I spent 10 years there,” Bluder said. “That’s a decade of your life. I kind of wish it was going to be against someone else, to be honest.”

Southern’s physical play never let the Hawkeyes get into an offensive rhythm. Turnovers continue to be a problem for Iowa, which has had 66 over the first four games. The Hawkeyes had 18 in this game. Iowa was just 6 of 23 on 3-pointers, 1 of 15 in the second half.

“This is a team that was hard to play because you either scored on transition or you got fouled,” Bluder said. “And there was no rhythm to the game.”

Southern: At Iowa State on Sunday. 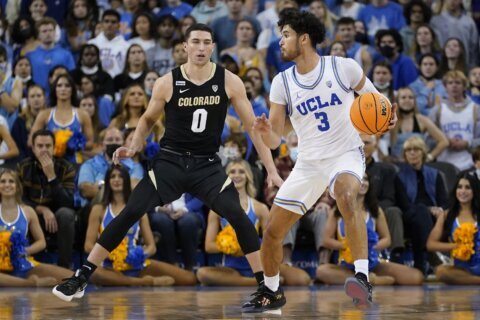