Keels, Banchero lead No. 9 Duke past No. 10 Kentucky in NYC

Krzyzewski plans to retire at the end of the season. He has 1,171 wins, the most in the history of the sport.

The two basketball blue bloods put on a spectacular show to open the season. The loud split crowd at Madison Square Garden that included many members of the New York Knicks and Bruce Springsteen was on its feet for most of the second half.

Duke built a 15-point lead with just under 10 minutes left. The Wildcats scored the next 11 points to get within 69-65 on a three-point play by Oscar Tshiebwe with 6:07 left. But that was as close as Kentucky got.

Tshiebwe finished with 17 points and 19 rebounds. Sahvir Wheeler added 16 points and 10 assists for the Wildcats.

Remy Martin added 15 points and David McCormack had 10 for the Jayhawks, who returned four starters from last season’s squad that lost to USC in the second round of the NCAA Tournament.

A.J. Hoggard scored 17 points and Julius Marble added 13 for the Spartans, who received the most votes outside the Top 25 in the preseason poll.

Few received a three-game suspension after he was cited for drunken driving in September. He will be back when Gonzaga hosts No. 5 Texas on Saturday.

Rasir Bolton added 15 points for Gonzaga, which was undefeated last season before losing to Baylor in the national title game. The Zags extended their school-record 52-game home winning streak.

LOS ANGELES (AP) — Johnny Juzang scored 19 points, one of four starters in double figures for UCLA in its rout of Cal State Bakersfield.

Courtney Ramey and Andrew Jones each scored 11 points and combined for six of Texas’ 3 pointers.

WEST LAFAYETTE, Ind. (AP) — Sasha Stefanovic made 5 of 6 3-pointers and finished with 23 points to lead Purdue past Bellarmine.

C.J. Fleming and Dylan Penn each scored 14 points for Bellarmine.

Sophomore Coleman Hawkins had a career-high 13 points and eight rebounds for the Illini, who were without star center Kofi Cockburn (three-game suspension). Andre Curbelo, Trent Frazier and Austin Hutcherson were also sidelined.

De’Vion Harmon added 15 points and Jacob Young had 14 for the Ducks, who led by as many as 23 points in the second half.

John Walker III led the Tigers with 19 points and PJ Henry had 10.

Top freshman recruit JD Davison came off the bench for his college debut but had a big impact in just 13 minutes. He had 12 points, six rebounds and six assists. Juwan Gary had 12 points and 10 rebounds in 17 minutes.

HOUSTON (AP) — Marcus Sasser scored 25 points, Taze Moore added 12 and Houston rallied from a 13-point deficit in the second half to beat Hofstra in overtime.

Sasser scored 19 points after the half as the Cougars outscored Hofstra 34-13 over the final 8 1/2 minutes and overtime.

Kyler Edwards had 10 points and 11 rebounds and J’Wan Roberts chipped in eight points and 15 rebounds for Houston. The Cougars extended their home winning streak to 26 games.

Arkansas was down eight points at halftime but went on a 14-2 run to start the second half.

COLUMBUS, Ohio (AP) — Zed Key hit a layup with less than a second left to lift Ohio State past Akron.

Ali Ali hit a step-back 3-pointer and a foul shot to put Akron up 66-65 with 6 seconds left in a game that was tied six times in the second half.

The Buckeyes inbounded the ball after a timeout, and freshman Malaki Branham got it inside to Key, who finished at the rim to seal the win.

E.J. Liddell led Ohio State with 25 points and 11 rebounds, but fouled out on Ali’s late 3-pointer. Key had a career-high 14 points.

Chandler, regarded as the top high school point guard in the country last year, shot 7 for 10 from the field and had four assists.

Brady Manek, a graduate transfer from Oklahoma, poured in 20 points as one of college basketball’s storied programs launched a new era.

Qudus Wahab added 17 points for the Terrapins, who led by 16 at halftime.

Maryland won its 45th consecutive home opener and improved to 28-2 against current members of the Metro Atlantic Athletic Conference.

Aiden Carpenter and Jayce Johnson each scored 10 for the Saints.

R.J. Cole scored 15 points and Tyrese Martin added 14 for the Huskies, who led by 29 points at halftime.

The Midshipmen beat a team ranked in The Associated Press Top 25 — where Virginia’s stay will be brief — for the first time since David Robinson led them past Syracuse 97-85 on March 16, 1986.

East Carolina transfer Jayden Gardner led Virginia with 18 points, but after the Cavaliers tied the game at 55-all with 8:53 left, they didn’t score again for more than 8 1/2 minutes. 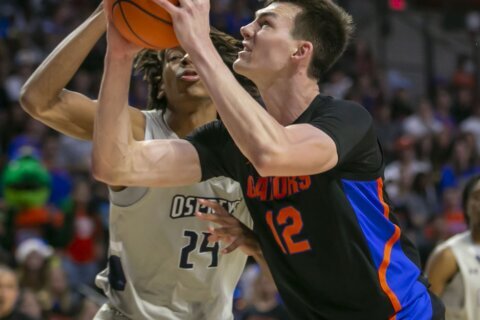 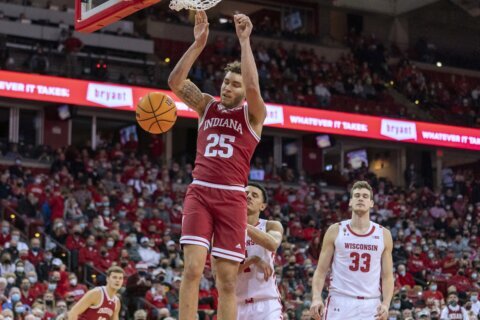