Using the phrase, which has been associated with the men’s tournament for years, was one of the recommendations stemming from an external review of gender equity issues of the tournaments. The report released in August was sparked by outrage at the disparities between amenities such as the skimpy weight room available for the women’s teams to use compared with the men’s.

It’s still unclear exactly how March Madness will be incorporated into the women’s tournament, but putting the slogan on the court would be a possible starting place. The tournament last season simply had “Women’s Basketball” on its court.

“Women’s basketball has grown tremendously over the past several years, and we remain focused on our priority of enhancing and growing the game,” said Lynn Holzman, vice president of women’s basketball. “The brand recognition that March Madness carries will broaden marketing opportunities as we continue that work to elevate the women’s basketball championship.”

“This is just the start when it comes to improving gender equity in the way the two Division I basketball championships are conducted,” said Lisa Campos, chair of the committee. “Adding the March Madness trademark to the Division I Women’s Basketball Championship will enhance the development and public perception of the sport, and the oversight committee looks forward to its work to address other recommendations through the governance structure to continue those efforts.”

Another potential change that could come down the road would be to expand the tournament field from 64 teams to 68 teams to equal the men’s bracket.

The NCAA also announced Wednesday that the national office will start from scratch in determining budgeting expenses for the two tournament staffs instead of adjusting the budgets from the previous fiscal year. This move will help show where differences in the allocations of resources occur in the two tournaments and potentially increase chances for cross-promotion. It will also try to make the two championships more financially equal.

This year’s women’s Final Four is in Minneapolis. 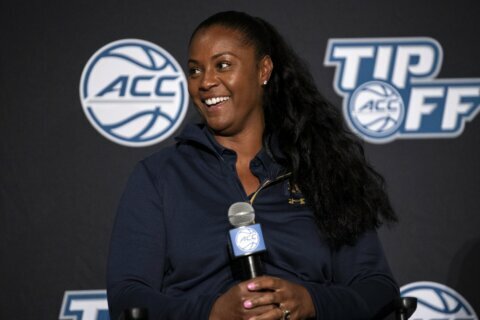