Shackelford, Alabama roll past Maryland and into Sweet 16

Jaden Shackelford and Alabama stuck with what got them to the NCAA Tournament, torching Maryland with 3-point shooting in a 96-77 second-round rout on Monday night.
Listen now to WTOP News WTOP.com | Alexa | Google Home | WTOP App | 103.5 FM
(1/11) 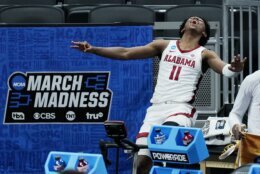 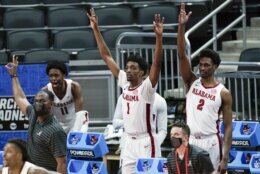 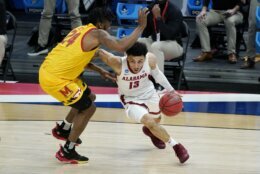 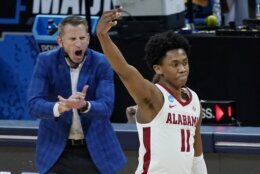 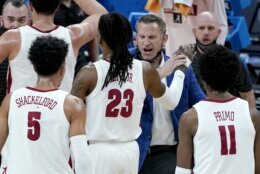 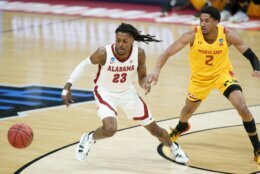 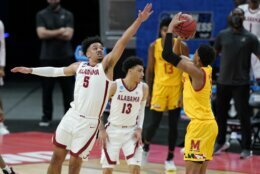 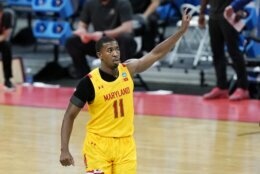 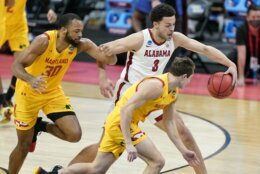 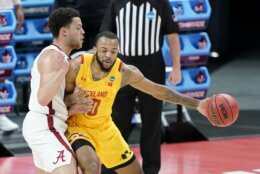 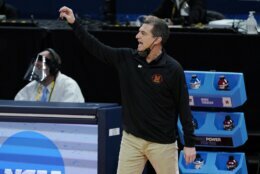 INDIANAPOLIS (AP) — Jaden Shackelford and Alabama stuck with what got them to the NCAA Tournament, torching Maryland with 3-point shooting in a 96-77 second-round rout on Monday night.

Shackelford scored 21 points and made five of Alabama’s 16 3-pointers as the second-seeded Crimson Tide advanced to their first Sweet 16 since 2004. Nate Oats, the second-year coach who made Buffalo a must-watch team before moving up to the Southeastern Conference, will bring his high-energy style to a regional semifinal for the first time.

That’s hardly a coaching resume to rival Nick Saban’s, but Oats is building a hoops culture in football-mad Tuscaloosa.

“I’m really happy for the guys,” Oats said. “It’s been a long time since they’ve played in the Sweet 16. They really bought into doing it the right way.”

After trailing early, the nation’s top 3-point shooting team quickly heated up to overwhelm the 10th-seeded Terrapins. Alabama next faces 11th-seeded UCLA in the East Region.

“It’s always something you imagine you’re capable of,” Shackelford said. “We just want to soak up the moment, and it’s something we’re proud of.”

Aggressive play on the boards was critical for the Crimson Tide, who outrebounded Maryland 40-19. They they made sure to cash in those transition opportunities, especially from beyond the arc.

“We didn’t come out the first game with as much defensive intensity as we needed to this game,” Shackelford said. “I feel like we kind of changed that. It was a big emphasis coming in. When we run off stops, our 3-ball usually falls more.”

Aaron Wiggins scored 27 points and Eric Ayala had 13 for Maryland (17-14), which was seeking its first Sweet 16 appearance since 2015 and 15th overall. The Terps’ loss left Michigan as the only Big Ten team to survive the opening weekend after the conference earned nine NCAA bids.

“Not the way we wanted to go out, obviously,” Maryland coach Mark Turgeon said. “We started well, were up 12-4 and the game got away from us. Alabama was terrific. They haven’t been shooting it that well lately, but they shot it well today. We’re a good defensive team, but we were a step slow and could never get caught up.”

John Petty Jr. broke out of a slump to score 20 points with 4 3s for the Crimson Tide, and reserve Jahvon Quinerly added 14 points.

Alabama made just 5 of 16 from deep in a first-round win over 15th-seeded Iona. The Crimson Tide already had eight 3s by halftime against Maryland to lead 46-38. The advantage quickly surged past 20 points as Alabama made five in a row from long range.

Oats said he spoke with Iona coach Rick Pitino after the Tide’s 68-55 first-round victory. The Hall of Famer told Oats the first tournament game is always the hardest and a team’s form can improve from there.

“We’ve played great defense all year, but the offense was bound to come around,” Oats added.

Oats, a former high school coach and math teacher, walked off the floor with his team to plenty of cheers from crimson-clad fans who traveled to Bankers Life Fieldhouse to watch the 3-for-all.

Both teams shot 53% and scored 36 paint points. Alabama dominated most other statistical categories, including a 39-9 advantage in bench scoring and 23-9 in second-chance points.

Maryland: The Terps were outmatched by Alabama’s quickness and perimeter proficiency. They made 10 of 27 3-point attempts but still couldn’t rally in the second half. Maryland lost four of its final six games.

Alabama: Getting Joshua Primo (10 points) back from a three-game absence with a knee injury no doubt helped the Tide feel whole offensively. Petty’s rebound from a recent slump was also a plus for a team that looks like a Final Four contender. SEC player of the year Herbert Jones had six points and six rebounds amid foul trouble.

Ralph says leaving UConn not easy, but Vandy a ‘no brainer’