KANSAS CITY, Mo. (AP) — Ja’Mee Asberry scored 26 of her 28 points after halftime and Oklahoma State rallied from 15 down for an 89-80 overtime win over Bedlam rival Oklahoma in the second round of the Big 12 Tournament on Friday night.

Asberry made a pair of key 3-pointers late in the second half that helped close the deficit for the third-seeded Cowgirls (18-7). Oklahoma State advanced to a semifinal matchup with No. 2 seed and 17th-ranked West Virginia on Saturday.

Natasha Mack made the second of two free throws to tie the game at 71 with 1:28 left and both teams missed on opportunities in the final minute. The Cowgirls pulled away with a 9-0 run in overtime and finished the game making 12 of their last 18 shots.

Taylor Robertson had 24 points and Williams scored 22 for the Sooners, who are on the bubble for an NCAA Tournament selection on Monday. Gabby Gregory added 14 points and Skylar Vann scored 11. 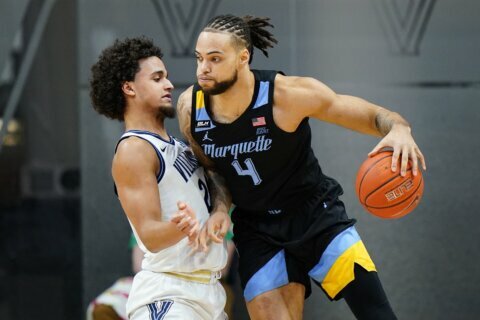