No. 8 Maryland beats Michigan, clinches share of B10 title 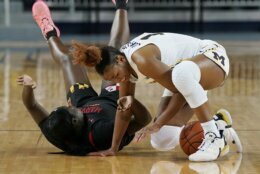 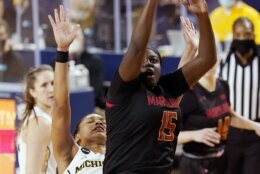 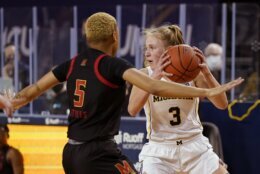 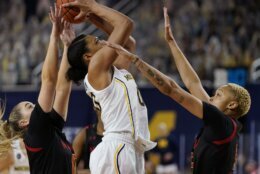 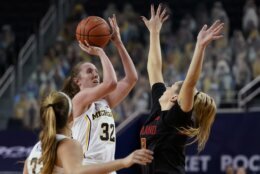 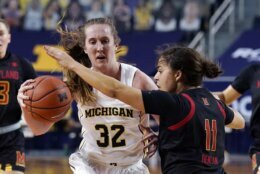 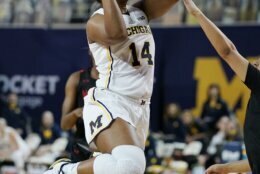 ANN ARBOR, Mich. (AP) — Since joining the Big Ten, Maryland has at least shared the conference championship in six of seven seasons.

This year, the eight-ranked Terrapins look like they have a shot to win their second national title in school history and first since 2006.

Diamond Miller scored eight of her 17 points in the first quarter to help Maryland start strong and Ashley Owusu had 22 points in an 88-63 victory over No. 12 Michigan that clinched a share of the Big Ten title on Thursday.

“What separates this team from all the rest, they’re making it look so easy when it’s really not,” Terrapins coach Brenda Frese said. “And we’re doing it during a pandemic.”

Maryland (20-2, 16-1 Big Ten) can win the conference championship outright by ending the regular season with a win against Penn State (9-13, 6-12) at home on Saturday.

“They’re hungry to be great and they’re easy to coach,” Frese said. “They play and practice the right way.”

“We need to get better than we were today, but that team has a chance to make a run in the NCAA Tournament for sure,” coach Kim Barnes Arico said.

With a trapping press and an active zone defense, the Terrapins held Hillmon to two points in the pivotal first quarter as they built a 27-13 lead.

“It was one of our most dominant defensive efforts,” Frese said. “She didn’t get anything easy. She had to play all of her 36 minutes to get 19 points and only had eight field-goal attempts.”

Maryland didn’t have any trouble keeping a comfortable cushion over the final three quarters, leading by as many as 29 points early in the fourth.

Maryland: Frese’s 19th team at the school has won nine consecutive games, peaking at the right time. If the Terrapins can win the Big Ten Tournament next week, they will improve their chances of getting a No. 1 seed in the NCAA Tournament.

When she was coaching at St. John’s, Barnes Arico faced the Terrapins’ national championship team during the NCAA Tournament and said their current squad is equally talented.

“I think they’re pretty special,” she said. “They’re deep. They’re unselfish. They have a great point guard and a great shooter.”

Michigan: Hillmon scored her first points after the Wolverines were already trailing 23-6 and didn’t score again in the opening quarter.

“It was tough to get me touches, but we were trying to get the ball to open people,” Hillmon said. “They were really crowding the paint.”

The star forward finished with a solid scoring total, but her team will have a hard time beating elite teams if she starts to slow offensively.

“We need to make shots from the outside now that teams are keying on Naz,” Barnes Arico said.

Maryland: Senior Day is set up well for a celebration, with a home game against the 11th-place Nittany Lions on Saturday, when the Terrapins can earn an outright Big Ten title.

Michigan: Hosts Northwestern in a matchup of teams hoping to improve their seeding for the Big Ten Tournament.