▶ Watch Video: Preparing for March Madness in the middle of a pandemic

Loyola University Chicago’s beloved 101-year-old chaplain and favorite fan, Sister Jean, has been cleared to attend the NCAA Tournament and support her team.

After the nun was unable to travel to games because of coronavirus restrictions, a university spokesperson confirmed to CBS News that Sister Jean Schmidt has been vaccinated against COVID-19 and can go to the tournament. She will go to Indianapolis to watch the Ramblers play Georgia Tech on Friday. 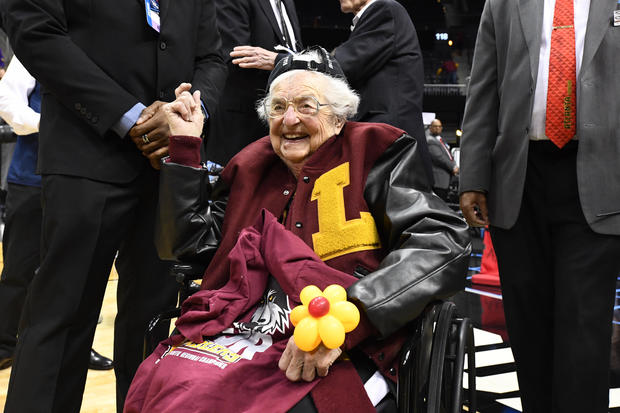 Sister Jean will cheer on the Loyola Chicago Ramblers in Indianapolis and hopes to recapture their NCAA Tournament success from 2018.

During a news conference Tuesday, she said being able to go was a “little struggle.”

“I finally said to one of our executives, I’m going to sound just like the old woman in the gospel who kept after the judge for what she wanted and finally, the judge said, ‘Let her do what she wants,'” she said. “So, I don’t know whether that had any influence or not, but what they wanted to do was to be sure that all the safety factors were taken into consideration.”

She said she had other ways of potentially attending the tourney, even if she didn’t get permission.

“One alum wrote, told me that her husband was willing to drive me down. Somebody else told me that she was going to sneak me out of the university, and another couple said that they thought they would like to kidnap me and then Loyola would have to search for me. Loyola didn’t know any of those things. I didn’t tell them until after,” she said.

Sister Jean became a household name during the team’s NCAA Tournament run in 2018. Following a string of upset victories, the No. 11 seed reached the Final Four and Sister Jean became a national sensation. She was so popular, a 2018 bobble head of her became the National Bobblehead Hall of Fame and Museum’s all-time best seller — until it was surpassed by a bobblehead of Dr. Anthony Fauci last year.

The museum unveiled a new bobblehead of Sister Jean on Wednesday, with part of the proceeds going to the Loyola Athletic Fund and Sisters of Charity of the Blessed Virgin Mary.

While she won’t be allowed to be around the players during this run, Sister Jean will still lead them in pregame prayer via telephone.

“I’m so happy I’m going, I just waited for the day that they would say yes,” she said.