Holmes and Patberg went to work early in the fourth quarter after Iowa erased a 10-point deficit to tie twice. Holmes turned a defensive rebound into a layup at the other end and Patberg sank two free throws as Indiana began a 10-2 run to gain control.

Nicole Cardano-Hillary poked the ball away from Iowa’s Caitlin Clark and raced full court for a fastbreak layin during the run. Indiana outscored Iowa 27-16 over the final 10 minutes to win going away.

Clark, the Hawkeyes standout freshman, had 30 points and scored the last two of the third quarter and first two of the fourth to pull Iowa into a 68-68 tie.

Clark was 12 of 27 shooting with four 3-pointers. Monika Czinani scored 16 for the Hawkeyes and McKenna Warnock 10 with 15 rebounds.

Cardano-Hillary scored 17 points for Indiana and Grace Berger 15. Holmes scored eight and grabbed eight of her 13 rebounds in the final period. Patberg scored 12 of her 23 points in the last quarter.

Cardano-Hillary has been starting at guard the last four games in place of JaeLynn Penn. Penn announced prior to Sunday’s game she has left the team. Penn has been troubled by foot injuries the past two seasons. Thanks to the NCAA’s decision to grant athletes an extra year of eligibility during the coronavirus pandemic, Penn has an option to return next season. 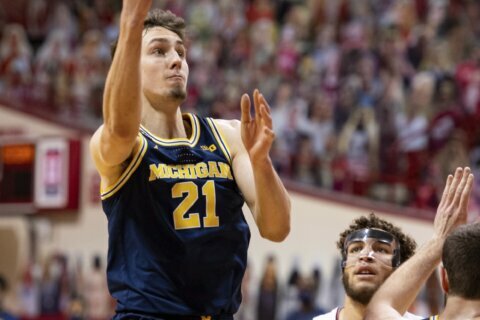