No. 3 Michigan hopes to shake off rust after long layoff

ANN ARBOR, Mich. (AP) — A three-week hiatus did little to diminish Michigan’s impressive resume: The Wolverines are still on top of the Big Ten, and they even moved up four spots in the AP Top 25 poll while idle.

The big question now is how they will look when they return to the court this weekend — and whether coach Juwan Howard’s team can find a groove again after such an unusual layoff.

“We trust as a staff that come Sunday we’ll be ready to play,” Howard said Friday. “I don’t know what it’s going to look like, but from start to finish we’re going to give our best effort.”

Michigan hasn’t played since a Jan. 22 win at Purdue. A day after that, the school announced it was pausing its whole athletic department after positive tests for a new COVID-19 variant that transmits at a higher rate. Since then, the Wolverines have missed five games.

No. 3 Michigan is finally set to return Sunday at No. 21 Wisconsin.

If the Wolverines (13-1, 8-1) play the way they did before the layoff, it will be tough for anyone in the Big Ten to catch them. Michigan has already beaten Minnesota by 25, Wisconsin by 23 and Maryland by 24. But those games were a while ago, and there’s no telling how much this lengthy break affected the Wolverines.

“It’s mainly chemistry,” forward Isaiah Livers said. “Being off for a week and a half, two weeks, not playing together, it’s really going to affect timing.”

Howard said his team has looked sloppy on the practice court, but that’s not a surprise.

Although Michigan is still in the lead, there has been some movement around the top of the league while the Wolverines have waited to return. Wisconsin has lost three times since Michigan last played, and so has Iowa. Now Illinois and Ohio State have emerged as the two biggest threats to the Wolverines in the title race.

“I’ve definitely watched more Big Ten basketball than I ever have,” Livers said. “I wasn’t really looking at the standings unless they put them on the game, but I would definitely have a couple games on, more than I would have time for. That was something new I was able to do is watch more basketball.”

It’s not clear how many of the games Michigan missed will be made up. If the Wolverines were to play a full 20-game conference slate — and finish March 7, as is currently planned on their schedule — that would require 11 games in a 22-day span. Howard did not sound crazy about that idea.

“From a health standpoint, I’m not sure if it would be smart, because of the long layoff, and rushing and playing that many games in a short amount of time doesn’t give the human body time to recover,” he said. “At the end of the day, we’re not machines. We are humans. That’s not the type of pressure that I want to put on my student-athletes.”

Although Michigan leads the league by two games in the loss column, the possibility of a more chaotic schedule down the stretch means the Wolverines may need that margin for error. They may also need some time to return to their previous form.

“It was disappointing to have to shut down. What he have to do now is just keep managing day by day, and how we can improve each and every day to get back to our habits,” Howard said. “So far in practice, we’ve been catching strides and getting better.” 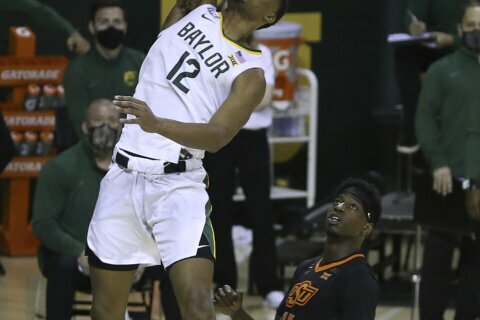