TUCSON, Ariz. (AP) — Helena Pueyo reached a career-high in scoring by halftime, Aari McDonald extended her string of double-digit scoring to 78 games and No. 11 Arizona gave Oregon State a rare wallop, 67-51 on Sunday.

Pueyo scored all of her 15 points in the first half as she made all four attempts from beyond the 3-point arc. McDonald poured in 20 points for Arizona (10-2, 8-2 Pac-12 Conference), her double-digit scoring streak ties the mark set by Oregon grad Sabrina Ionescu.

Arizona upended No. 10 Oregon 57-41 on Thursday, sweeping the Oregon schools for the first time since 2011.

Oregon State (3-4, 1-4) was playing for the first time since Dec. 19 after an extended pause for COVID-19 concerns. Taylor Jones and Savannah Samuel led the Beavers with 11 points each, three other players scored eight apiece.

Arizona closed the first half on a 14-1 run to build a 40-26 lead. Oregon State was never able get closer than 11 in the final two quarters.

This marks the first time Arizona has won eight of its first 10 conference games since the 2003-04 season.

Arizona’s roster was bolstered over the weekend when Madi Conner, who graduated a semester early from high school, was granted eligibility. Conner did not play Sunday as she is following COVID-19 protocols.

The Beavers fell out of the WBCA Coaches’ poll on Dec. 22, marking the first time they have not been ranked in the poll since the 2013-14 postseason rankings. OSU also fell out of the AP Poll on Dec. 21, snapping a 76-week run, the seventh-longest in the nation at the time. 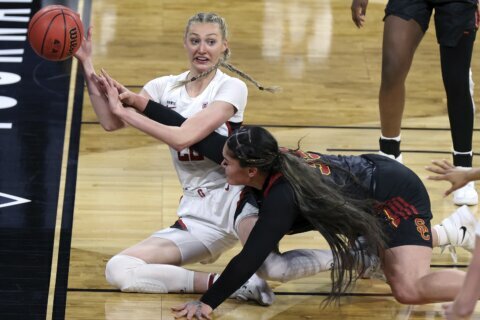