Hillmon broke Michigan’s program scoring record — for men’s or women’s — by making 20 of 30 field goals and 10 of 14 free throws to reach the half-century mark. It was the highest scoring output this season in Division 1, and the first 50-point game in the Big Ten since Rachel Banham’s 52 for Minnesota on Feb. 21, 2016.

But it wasn’t enough to overcome Michigan’s 16-point, third-quarter deficit.

Michigan started the fourth on a 17-3 run to take a 71-69 lead as the Buckeyes missed their first eight shots from the field. Tanaya Beacham’s layup with 1:58 left was Ohio State’s first make of the fourth, tying it at 73.

Hillmon converted a three-point play with 11.7 seconds left to pull Michigan within 78-77, and Ohio State’s Braxtin Miller made 1 of 2 free throws at the other end to give the Wolverines another chance. But Michigan turned it over on an inbounds pass and Sheldon sealed it at the free-throw line with two makes.

Hillmon, whose previous best scoring game was 35 points, broke the Michigan women’s scoring record that has stood since Diane Dietz had 45 against Illinois on Feb. 27, 1982. Hillmon also broke Dietz’s field goal record of 17 set in the same game. Michigan’s scoring record on the men’s side is 48 points set by Rudy Tomjanovich and Cazzie Russell — both in the 1960s.

Ohio State (8-1, 4-1 Big Ten) had five starters finish with double-figure scoring. Madison Greene added 15 points, Dorka Juhasz had 14 points and seven rebounds, and Beacham and Miller each scored 10. Aaliyah Patty, averaging 11.9 points and 6.8 rebounds, did not play due to a shoulder injury.

Akienreh Johnson added 14 points, six rebounds and five assists for Michigan (10-1, 5-1), which is scheduled to play Purdue on Sunday. 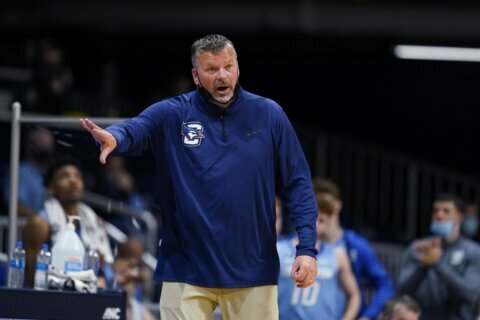