FAYETTEVILLE, Ark. (AP) — Moses Moody and Davonte Davis combined for 45 points, five reached double figures in scoring and Arkansas raced away to to a 99-69 win over Georgia on Saturday, shooting over 50% from either side of the 3-point arc.

Moody led with 25 points on 9-for-15 shooting, Davis added 20 on 9-for-14 shooting —- both were career highs in scoring. Jalen Tate and Vance Jackson each scored 15 for the Razorbacks (10-2, 2-2 Southeastern Conference), Jackson making 4 of 5 from distance, and JD Notae scored 12. Tate double-doubled with 10 assists as Arkansas had 24 assists on 36 makes.

The Razorbacks were without freshman guard Khalen Robinson, sidelined by a persistent foot injury.

Arkansas rebounded from back-to-back losses to ranked Missouri and Tennessee and will next travel to LSU on Wednesday. Georgia plays host to Auburn on Wednesday. 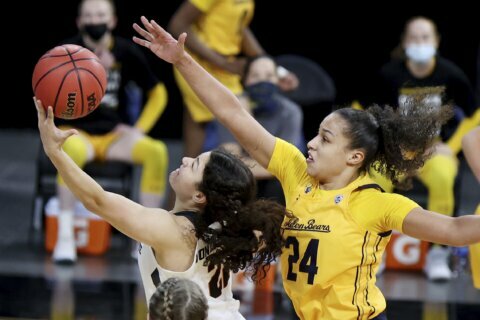