BOSTON (AP) — Jay Huff matched his career-high with 18 points, adding eight rebounds on Saturday as No. 22 Virginia survived almost nine minutes in the first half without scoring to beat Boston College 61-49.

Asked what he told the team after both teams went the entire span between TV timeouts without scoring, Virginia coach Tony Bennett said with a chuckle, “I said, ‘make some shots.’”

After considering adjustments, Bennett said he skipped that idea.

“We’re going to do what we started the game with. You’re going to have to figure it out,’” Bennett said, blaming the drought on turnovers and allowing offensive rebounds. “When we cleaned that up, that’s when we got it back on track.”

Sam Hauser scored 17 with 10 boards to help the Cavaliers (6-2, 3-0 Atlantic Coast Conference) win their third straight since a Dec. 26 loss to top-ranked Gonzaga.

DeMarr Langford Jr. scored 14 and CJ Felder had nine points and nine rebounds for BC, which managed a season-low points. The Eagles (2-9, 0-5) have lost eight of their last nine matchups against Virginia, with the one victory coming in January against the No. 18 and defending NCAA champion Cavaliers — BC’s last win over a ranked team.

“When I came in the locker room, I said ‘I’m going to give you guys a history lesson,’” Bennett said. “We were not right. Casey (Morsell) was sick. I remember it was a tough setting. I said, ‘Be ready. Every game is significant. Those guys came after us.’”

Boston College stayed close in the first half by scoring 14 straight points while holding Virginia without a point for 8:44. But the Eagles didn’t really take full advantage: They went scoreless for more than five minutes themselves, with the score was stuck at 18-16 from the 11:06 mark until there was 5:56 left in the half.

The drought turned an 18-11 Virginia lead into a 25-18 deficit. But the Cavaliers scored the next nine points and took a three-point lead into the half. After Felder made a 3-pointer to open the second, Virginia scored 12 of the next 14 points to open a double-digit lead.

Wynston Tabbs, the Eagles’ leading scorer, was scoreless while missing all nine of his shots. BC was without starting point guard Makai Ashton-Langford (knee) and forward Steffon Mitchell (calf).

Virginia was without Morsell, Kody Stattman and Kadin Shedrick, as well as assistant coaches Orlando Vandross and Kyle Getter.

“You need everyone,” Bennett said. “It is a reality check.”

Virginia’s only loss since the day after Thanksgiving was to No. 1 Gonzaga. The Cavaliers also had four games postponed or canceled. 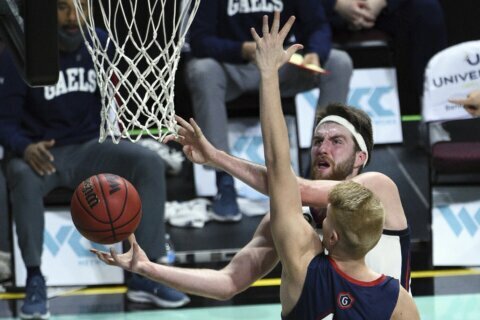