VILLANOVA, Pa. (AP) — A bright light coming from a sunny window delayed the start of the second half. When the game finally resumed, Villanova’s offense shone on the court — neither a dark curtain nor Providence could blot out the Wildcats.

Caleb Daniels added 12 points and Jermaine Samuels had 10 for Villanova (10-1, 5-0 Big East), which rebounded from an ugly first half to win its eighth consecutive game.

“We just couldn’t score,” coach Jay Wright said of the first half, when the Wildcats shot 27%.

“We got used to their length and speed,” Wright said.

But they had to wait for about 15 minutes while a curtain was placed over a window high in Finneran Pavilion from which a stream of sunlight fell on the Providence bench.

With the window covered, the sun stopped splashing on the Friars’ faces. But Villanova shots rained down on the basket.

The Wildcats surged out of the locker room, hitting 10 of their first 21 second-half shots, and Jeremiah Robinson-Earl’s dunk on a pass from Moore made it 50-38 Villanova with 10:12 remaining. That capped a 26-11 run after halftime.

Villanova got contributions from six players during the spurt, with Daniels’ eight points and Moore’s six leading the way.

“They did a great job in the first half,” Gillespie said. “They’re tough, they’re physical. (In the second half) we were able to get good looks at the rim.”

The Wildcats took control from there, maintaining a double-digit lead the rest of the way. They outscored Providence 47-29 in the second half.

Villanova was back on the court for just the second time since Dec. 23 due to multiple COVID-19 stoppages. The Wildcats eked out a 76-74 home win over Seton Hall on Tuesday, a victory that impressed Wright more in terms of resiliency than execution.

But that was to be expected without team practices and with players in quarantine, getting to the gym for individual workouts only — if at all. The Wildcats looked rusty in the first half, when they missed 22 of 30 shots from the field while committing seven turnovers.

But a Gillespie 3-pointer at the halftime buzzer sent Villanova into the locker room down just 27-24.

Providence led by as many as nine points in the first half, when both teams struggled offensively. Jimmy Nichols’ one-handed, driving slam dunk got the Friars going and helped kick-start a 10-0 run that made it 20-11 with just over six minutes left before the break.

The Wildcats looked out of sync all half before turning things around after halftime.

Struggling like they did in the first half at home against Providence is nothing new for the Wildcats.

Villanova entered with three home losses to Providence since 2013, the most victories by any Big East team over the Wildcats during that time.

“They always give us trouble,” Wright said.

Providence entered feeling good, having won at No. 11 Creighton 74-70 on Wednesday. It was their seventh victory over a ranked team in the Friars’ last eight tries dating to last season.

Providence: After four straight on the road, the Friars are scheduled to play four of their next five at home. They will be looking to use that stretch to position themselves favorably for the Big East Tournament.

Villanova: After several COVID-19 pauses, the Wildcats now have a busy slate to end the regular season. They are scheduled to play 12 games in 38 days.

Villanova: The Wildcats play the first of three straight on the road Thursday at UConn. It will be Villanova’s first trip to Storrs since Feb. 16, 2013. 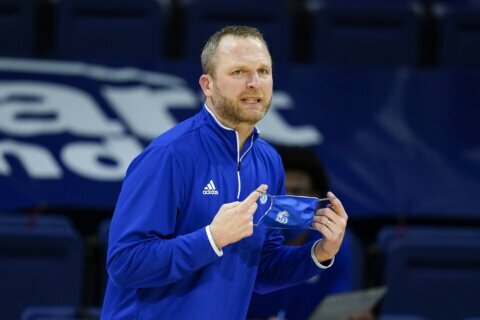