SENIOR STUDS: South Alabama’s Michael Flowers, Kayo Goncalves and John Pettway have collectively scored 54 percent of the team’s points this season and have accounted for 59 percent of all Jaguars scoring over the last five games.

CLAMPING DOWN: The Jaguars have allowed only 71.5 points per game across six conference games, an improvement from the 80.2 per game they gave up in non-conference play.

CREATING OFFENSE: Flowers has either made or assisted on 55 percent of all South Alabama field goals over the last three games. The senior guard has accounted for 30 field goals and 13 assists in those games.

UNDEFEATED WHEN: Georgia Southern is a perfect 6-0 when it holds an opponent to 65 points or fewer. The Eagles are 3-6 when opponents score more than 65.

DID YOU KNOW: Georgia Southern is ranked second among Sun Belt teams with an offensive rebound percentage of 36.5 percent. The Eagles have averaged 12.9 offensive boards per game. 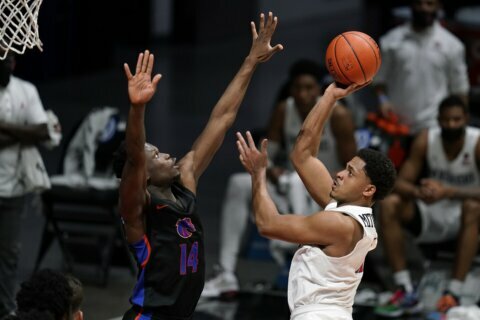