Dana Evans scored 17 of her 20 points in the second half, and the second-ranked Cardinals rallied for a 74-64 victory over the Norse.

Olivia Cochran scored 13 points and Elizabeth Dixon had 12 in Louisville’s first game since Dec. 9. The Cardinals’ schedule has been upended by numerous COVID-19-related cancellations and postponements.

Walz said his team maybe got five practices in during the 23 days between games, and some players could not get into the gym to shoot because of quarantine. Not surprisingly, the Cardinals (6-0) got off to a slow start, shooting just 35% and going 1 for 14 from 3-point range in the first half.

In some ways, Walz said the time off was like hitting the reset button for his team.

“Overall, I’m actually pleased with the condition and the shape that we were in, but you can definitely see that our outside shooting was impacted a little bit by being off as long as we have been,” Walz said.

Kianna Smith had 11 points, 10 rebounds, two blocks and two steals for Louisville, which shot 50% percent in the second half. Hailey Van Lith finished with 10 points.

“They played good defense, but we did have some open ones that we missed,” Evans said. “The first game back we expect we didn’t expect to make every shot. So, we knew it was going to be a little rough, but now we know what to do. Just get in the gym and shoot. We’ll be fine.”

Lindsey Duvall, who transferred to NKU from Louisville, led the Norse with 20 points.

The schools did not schedule the game until Thursday afternoon, nearly 24 hours before the 3 p.m. tip. Attendance was limited to just family and friends of the staff and players on both teams. There were approximately 70 people in the KFC Yum Center, most decked out in NKU gear. The Norse have eight Kentuckians on their roster.

Norse coach Camryn Whitaker said her team has not had a chance to have fans at its games. She said every player had family show up.

“One of the main reasons why we just wanted to come here was because I thought if we’re going to play Louisville, we might as well get a pass list and give our kids’ parents an opportunity to watch them play,” she said.

Louisville has held the second spot in the Top 25 during its time off. The slow start in the win probably won’t hurt its position.

Northern Kentucky: The Norse played their first game in 12 days, but they managed to stay with the Cardinals by using their defense to help neutralize Louisville’s size inside. They had won four in a row.

Louisville: Despite the shooting woes and the occasional defensive mistake, Walz said he found plenty of positives to take away from the win, including his team committing just 13 turnovers. 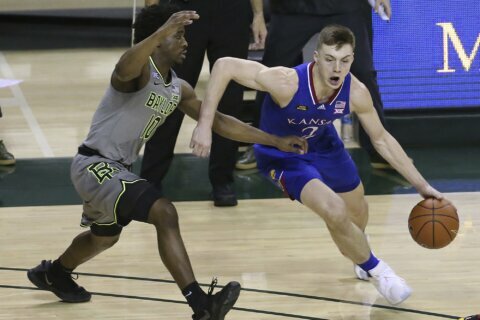