The Cardinal (6-0, 3-0 Pac-12) hasn’t lost in Los Angeles to the Trojans since 2008, and has won 11 in a row against them. Stanford closed out a week in which Tara VanDerveer became the winningest coach in women’s basketball history, passing the late Pat Summitt. VanDerveer now has 1,010 victories.

Lexie Hull had 16 points and nine rebounds. Freshman Cameron Brink added 10 points and six rebounds before fouling out in the final minutes. Haley Jones grabbed 12 rebounds, helping the Cardinal to a whopping 54-26 edge, including 22-4 on the offensive glass.

Olivia Nelson-Ododa added 16 points and 11 rebounds for UConn (4-0, 3-0 Big East), which was playing for the fourth time in eight days. Freshman Paige Bueckers finished with 19 points and nine assists.

It was the second 93-point romp in as many days for Baylor, which beat Northwestern State 136-43 on Friday. The 253 points in the two games are a Big 12 record, and three points short of Savannah State’s NCAA mark from November 2018.

NaLyssa Smith and Queen Egbo also scored 14 points as the Lady Bears (7-1) won their nation-leading 61st consecutive home game for their third blowout victory in four days, and fourth in the past six. Baylor won the four games an average margin of 66.5 points.

The Wildcats (7-1) shot 51% in rolling to their largest victory margin this season. They led led 48-11 at halftime before stretching it to 74-16 in the third and extending the margin over 60 in the fourth.

Lilly Hatton and Jackie Carman each had seven points for the Terriers (3-3), who missed their first 11 attempts in a 1-of-15 first quarter that dug a 21-5 hole.

Arkansas went 14 of 27 from 3-point range and shot 54% overall. The 14 3s were the most ever allowed by a Joe Foley coached team. Foley has 805 career wins; 349 coming at Little Rock. Dungee matched her career-high from long range with five.

Maryland trailed 19-16 after one quarter as the Dukes (4-3) made 9 of 18 shots to 7 of 22 for the Terps. Bibby converted a three-point play to start the second quarter to tie the game and two minutes later Maryland went on an 11-0 run. After two James Madison free throws, the Terps scored seven more. It was 45-27 at the half.

The Jackrabbits (5-2) beat Iowa State and Gonzaga and jumped into the Top 25 before losing their last two games to Kansas State and Northern Iowa.

Paiton Burckhard added 13 points for South Dakota State, which took the lead by scoring nine-straight points in the first quarter and turning that into a 14-2 run. The lead was 31-22 at the half and was 13 midway through the third quarter.

The Bears (4-2), who have Power Five wins over No. 14 Maryland and Missouri but lost to Wake Forest,

PULLMAN, Wash. (AP) — Johanna Teder scored 17 of her career-high 20 points in the second half and Washington State beat Oregon State to snap a 13-game losing streak in the series.

Teder made four 3-pointers in the fourth quarter, the last giving Washington State a 58-55 lead with 1:13 left. The Cougars closed on an 8-0 run as Oregon State was scoreless in the final three minutes.

Freshman Charlisse Leger-Walker added 13 points and seven rebounds, and Bella Murekatete had 10 points, all in the first half, and six boards for Washington State (3-0, 2-0 Pac-12). Teder was 6 of 10 from 3-point range as the Cougars made 8 of 25.

Freshman Yasmin Ott scored 18 points, with four 3-pointers, for Georgetown. Kelsey Ransom added 14 points and USC transfer Jillian Archer was held to two points. Graduate student Anita Kelava did not play as she is working on her visa to return to the United States. 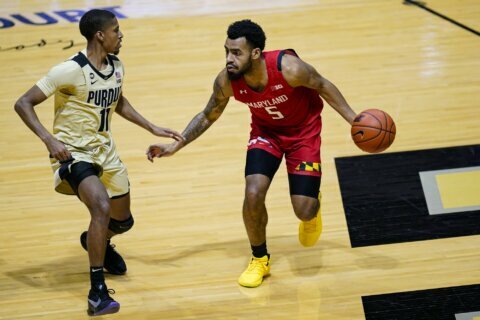