Hours before the game, LSU announced Wade would not be available because of contact tracing issues. Wade said during a Zoom press conference after the game that he tested positive while in quarantine last week.

Freshman Cameron Thomas scored 19 points and Darius Days had 16 points and 10 rebounds for LSU (4-1). The Tigers were 32 of 68 from the floor, snapping a four-game streak of shooting at least 50%.

LSU led 50-42 before making a 3-pointer on three possessions — with two from Thomas and another by Smart — for a 14-point advantage.

Demarkus Lampley scored 16 points and Zach Nutall added 13 for San Houston State (3-4). Nutall, who entered averaging 25.5 points per game, was held to 3-of 12 shooting. The Bearkats had scored at least 100 points in their last three games — against Dallas Christian, Howard Payne and Le Tourneau. 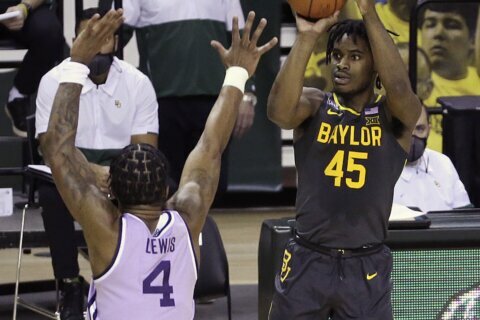