BOTTOM LINE: Oregon looks for its fourth straight win over Washington at Alaska Airlines Arena. Washington’s last win at home against the Ducks came on Jan. 18, 2015.

SUPER SENIORS: Oregon has relied heavily on its seniors. Through four games, Eugene Omoruyi, Chris Duarte, Eric Williams Jr., N’Faly Dante and LJ Figueroa have combined to account for 81 percent of all Ducks scoring this season.EXCELLENT EUGENE: Omoruyi has connected on 33.3 percent of the 18 3-pointers he’s attempted and has made 4 of 12 over the last three games. He’s also made 62.5 percent of his foul shots this season.

ASSIST DISTRIBUTION: The Ducks have recently created buckets via assists more often than the Huskies. Washington has 25 assists on 67 field goals (37.3 percent) across its previous three matchups while Oregon has assists on 51 of 97 field goals (52.6 percent) during its past three games. 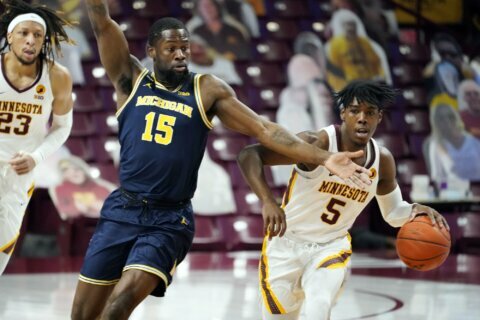