FAYETTEVILLE, Ark. (AP) — Nursing a two-point lead and hoping to pull off an upset, No. 16 Arkansas saw its chances of holding off No. 4 Baylor slipping away.

The Razorbacks (5-1) had just missed a pair of free throws, and a layup, giving the Lady Bears a slight chance with under 15 seconds left.

But Baylor missed a wide-open look at a 3-pointer, and Arkansas was able to add two free throws from Amber Ramirez to claim an 83-78 win at home Sunday.

The win was Arkansas first over a top five opponent since 2003 when the Razorbacks knocked off No. 2 LSU 82-72. Arkansas was ranked No. 10 at the time.

“We made defensive stops,” said Arkansas coach Mike Neighbors. “The free throws would have certainly made the celebration a little bit earlier and a little easier. I just passed two of our kids in the locker room they said they were going to go shoot free throws.

“We can live with those when we get to celebrate.”

Arkansas was able to secure the win by hitting 30 of 39 free-throw attempts, while Baylor shot just 18 free throws.

Baylor coach Kim Mulkey said Arkansas’ ability to get to the foul line was huge.

“It was the difference in the ballgame,” she said. “There are three things that style of offense wants to do. They want to shoot threes, get the the foul line and score layups. And they did two out of the three against us well tonight.”

Ramirez scored 23 points and Chelsea Dungee added 22 for Arkansas to claim the Big 12/SEC Challenge win. The Razorbacks led by 10 early in the fourth quarter before the Lady Bears cut it to 78-76 on DiJonai Carrington’s layup with 3:06 left.

Dungee hit two free throws 10 seconds later to restore a four-point edge. NaLyssa Smith’s layup with 29 seconds remaining brought Baylor back within two. Ramirez hit the second of two free throws with 22 seconds left to give Baylor a chance to tie the game.

Caitlin Bickle’s 3-pointer from the top of the key missed and Ramirez sank two free throws to seal the win.

Neighbors, in his fourth season at Arkansas after leading the University of Washington to the Final Four in 2016. Arkansas won 24 games last year, and were a likely NCAA Tournament team until the coronavirus forced the tournament to be canceled.

“I think what it is is validation … for all these kids,” Neighbors said. “Hey why are you going to Arkansas? They haven’t done anything. So validation for all those kids that believed, and those in the locker room that buys into what we do.”

Baylor guard DiDi Richards, who was injured in a freak practice accident when she collided with teammate Moon Ursin on Oct. 24, played a team-high 37 minutes and scored eight points to go along with eight assists.

Richards suffered paralysis in her lower extremities with the injury. She was cleared to return to the team last week and played against South Florida.

Arkansas was just 5 of 20 from the three-point line, but the ones the Razorbacks hit were clutch. Makayla Danies hit back-to-back 3-pointers in the first half to stop a Baylor run, then Ramirez hit a big 3-pointer that gave Arkansas the 10-point lead in the fourth quarter. … Baylor center Queen Egbo played just 10 minutes and scored five points before fouling out of the game. … Arkansas sophomore Marquesha Davis gave the Razorbacks a lift off the bench with eight points, four rebouds and four steals.

“I hugged a couple kids even though it’s COVID for just believing back when we were picked 14th in our league that first year,” said Neighbors.

Arkansas: The Razorbacks will travel to SMU on Thursday. 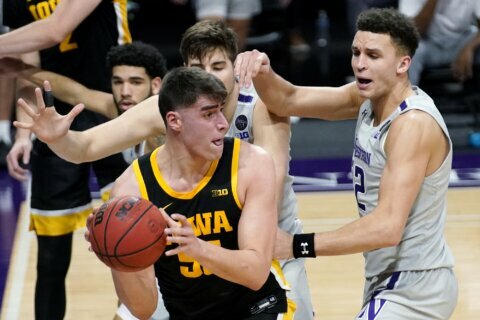