No. 15 Texas Tech looks to end streak vs OU

SAVVY SENIORS: Oklahoma has relied heavily on its seniors this year. Austin Reaves, Brady Manek, Alondes Williams and Kur Kuath have combined to account for 58 percent of the team’s scoring this year and 61 percent of all Sooners points over the last five games.MIGHTY MAC: Mac McClung has connected on 31.6 percent of the 38 3-pointers he’s attempted and has made 8 of 26 over his last five games. He’s also made 85.1 percent of his free throws this season.

STREAK SCORING: Oklahoma has won its last four home games, scoring an average of 88.3 points while giving up 62.5.

ASSIST RATIOS: The Red Raiders have recently used assists to create baskets more often than the Sooners. Oklahoma has 45 assists on 91 field goals (49.5 percent) across its previous three contests while Texas Tech has assists on 34 of 59 field goals (57.6 percent) during its past three games.

TOUGH TECH D: Texas Tech has held opposing teams to 52.4 points per game this year, the second-lowest figure among all Division I teams. The Red Raiders have allowed just 49 points per game over their last five games. 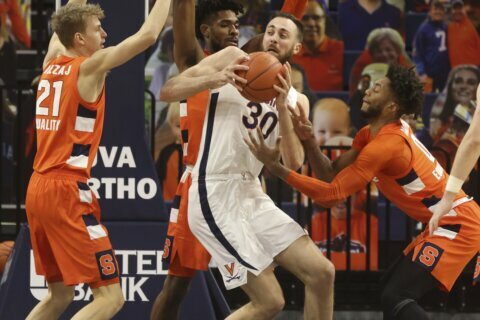