COLLEGE PARK, Md. (AP) — Ashley Owusu scored 19 points, three teammates had a double-double and No. 14 Maryland rolled to a 101-59 win over James Madison on Saturday.

Reserve Faith Masonius scored 14 points and grabbed 12 rebounds, both career highs, for the Terrapins (5-1). All five starters were in double figures with Chloe Bidding scoring 17 with 10 boards and sophomore Mimi Collins scoring 14 with a career-high 11 rebounds for her first double-double.

Maryland trailed 19-16 after one quarter as the Dukes (4-3) made 9 of 18 shots to 7 of 22 for the Terps. Bibby converted a three-point play to start the second quarter to tie the game and two minutes later Maryland went on an 11-0 run. After two James Madison free throws, the Terps scored seven more. It was 45-27 at the half.

The Terps shot 62% in the second half and 51% for the game while James Madison ended up at 33%. Maryland had a 54-36 advantage on the boards. Diamond Miller had 18 points and Katie Benzan 12 for Maryland and Owusu had eight rebounds and seven assists.

The game was added on Thursday. On Friday, it was announced Maryland’s game on Wednesday with No. 17 Ohio State had been postponed. Maryland’s next scheduled game is at Penn State on Dec. 31. 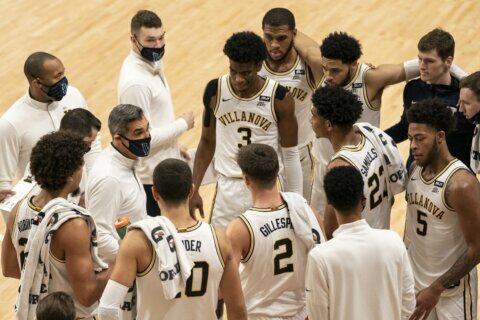