Jaxon Etter made a layup to give Georgia its first lead of the game at 75-73 with 1:17 to play. Samford’s Myron Gordon answered with a layup 16 seconds later, but Wheeler made two free throws and, after two missed shots on the other end, Kier hit the first of two foul shots with 13 seconds to go. He missed the second, but Horne grabbed the offensive rebound and his putback made it 78-73 with 10 seconds to go.

Gordon led Samford with a career-high 29 points. The redshirt senior made 9 of 14 from the field, 4 of 8 from 3-point range and 7 of 9 from the free-throw line. Christian Guess added 14 points and 10 rebounds and Richardson Maitre had 12 points and five assists.

Georgia made just 3 of its first 18 shots, including a nearly 6-minute stretch without a made field goal, as Samford took a 24-11 lead when Triston Chambers hit a 3-pointer with 8:45 left in the first half. Georgia scored 10 of the final 13 first-half points to pull within four at the break and then shot 50% — including hitting 13 of 20 from the field over the last 12-plus minutes — in the second half.

Georgia, which led for just 46 seconds, grabbed 15 offensive rebounds and had a 19-5 edge in second-chance points. 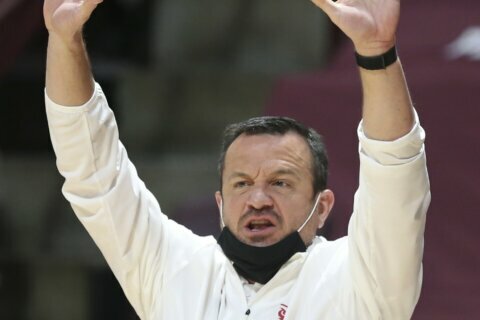