MADISON, Wis. (AP) — Brad Davison bounced back, and so did Wisconsin.

Davison scored 23 points, and No. 13 Wisconsin beat Rhode Island 73-62 on Wednesday in a nonconference game added to the schedule two days ago.

Wisconsin (4-1) originally was slated to host No. 25 Louisville as part of the Big Ten/ACC Challenge, but the Cardinals canceled their second consecutive game following a positive COVID-19 test within the program. Rhode Island was added as a replacement on Monday.

“Obviously, good to get back on the court and thankful to be able to play a game given what’s happening around the country in different places,” Wisconsin coach Greg Gard said.

Davison did not make a field goal during Wisconsin’s heartbreaking 67-65 loss to Marquette on Friday. The Badgers lost when Justin Lewis tipped in a missed free throw at the buzzer.

But Davison got off to a fast start against Rhode Island, scoring 17 points to help the Badgers to a 33-16 halftime lead.

Wisconsin opened a 53-31 lead on Jonathan Davis’ turnaround jumper with 11:58 remaining. The Rams closed to 62-54 on a 3-pointer by Jeremy Sheppard with 4:40 left, but they couldn’t complete the comeback.

“The Marquette game, I found myself on the bench in foul trouble, it was really hard to get into the game,” said Davison, who was 12 for 12 from the line against the Rams. “But I knew coming out tonight, that I wanted to be aggressive and I wanted to do my best for the time, so I hunted my shots early.”

Sheppard had 13 points for the Rams (3-3), who had won three straight.

“I’m disappointed with the way we started the game on both ends of the floor,” Rhode Island coach David Cox said. “If you give the No 13 team, Big Ten co-champs, a 16- or 17-point lead going into the half, that makes it really challenging to get back into the game.”

The Badgers jumped all over the cold-shooting Rams, who were 7 of 27 in the first half.

Davison hit three 3-pointers in the early going to stake Wisconsin to a 10-2 lead. The Badgers pushed the lead to 21-8 on Nate Reuver’s inside turnaround with 9:01 left in the half.

“Brad obviously carried us pretty much the entire game, knocking down shots, making free throws, particularly in the first half because it took a while for us to get going,” Potter said. “But, that’s the beauty of the team, very balanced. Different guys will put up big-time games and then maybe the next game, they won’t play as well, but other guys are there to pick them up. Brad did a great job tonight.”

D’Mitrik Trice helped shut down Rams point guard Fatts Russell, who entered averaging a team-best 17.6 points per game. Russell finished with eight points on 3-of-14 shooting, with just one assist and three turnovers.

“If you have hold Fatts Russell to 3 for 14, I’ll have to dig really deep into their box scores to find when he’s been held like that. He did a terrific job,” Gard said of Trice. “We got him to take some tough shots. I’ve seen him make a ton of tough shots in watching their five games, and I know he’s a really good player in their league, but Trice set the tone.”

The victory is not likely to have much impact on the rankings for the Badgers, who tumbled from fourth to 13th after the loss to Marquette.

Reuvers, a 6-foot-11 senior forward, moved past Ethan Happ as Wisconsin’s career shot-blocking leader when he swatted away Sheppard’s layup attempt with 9:31 left in the first half. Happ had 154 blocks from 2016-19. Frank Kaminsky had 153 blocks from 2012-15.

Rhode Island: The late addition to the schedule allowed the Rams to avoid an 11-day layoff between games.

Wisconsin: Barring schedule changes, the Badgers have one nonconference game remaining before opening Big Ten play at home against Nebraska on Dec. 21.

Rhode Island is at Western Kentucky on Sunday. 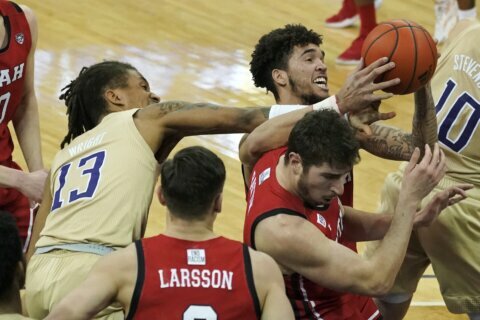