Roy Williams couldn’t wait to get back on the practice court with No. 16 North Carolina after the worst season…
Listen now to WTOP News WTOP.com | Alexa | Google Home | WTOP App | 103.5 FM

Roy Williams couldn’t wait to get back on the practice court with No. 16 North Carolina after the worst season of his Hall of Fame career. His players noticed, too, in the urgency Williams had in pouncing on any missed detail.

It was the only way he knew how to turn last year’s debacle – his only losing season – into the foundation for a leap back to a more Carolina-like season.

“I’m hungry,” Williams said. “I did not enjoy that. It’s not something that was fun. So I’m hopeful that the hunger and motivation, our players will feel it the same way.

“You can’t just snap your fingers and change things. But you can focus on this year and try to do everything to the best of your ability every single possession.”

The Tar Heels (14-19) struggled amid a talent drain from the previous season as well as a wave of injuries on the way to finishing at the bottom of the Atlantic Coast Conference. That included their first-ever home loss to Clemson, blown late leads in a wild overtime loss to rival Duke and a season-ending 28-point loss to Syracuse that stood as the program’s worst in any ACC Tournament game.

They’re hoping a deep front line led by senior Garrison Brooks and an influx of talent from 247sports’ No. 2-ranked recruiting class have this year’s group back to being a league contender. UNC is picked to finish fourth in the ACC, while Brooks is the preseason pick as league player of the year.

The most pressing question comes with the departure of one-and-done point guard Cole Anthony, last year’s top scorer at 18.5 points per game. That opens time for Caleb Love, UNC’s highest-ranked recruit and the No. 2 point guard in the class.

“Obviously we didn’t like how the season ended,” Bacot said. “Coach has been turned up every day. And we’ve been bringing it every day too, not taking anything for granted. He’s been on us about any little mistake, and I mean that’s just the way it is. We’re trying to have a perfect season.”

While Brooks and Bacot will lead the frontcourt, there’s plenty of depth behind them, too.

The recruiting class includes a pair of five-star big men in 6-10 Day’Ron Sharpe and 7-footer Walker Kessler, with Bacot saying early practices had included Williams mixing different combinations of the quartet together.

“We’ve all got different strengths and weaknesses,” Bacot said. “And we all play well together.”

UNC needs a healthy Leaky Black, a 6-8 junior who offers perimeter versatility and the ability to contribute as a point guard but dealt with ankle issues last year.

“I just know i want to be available every game and my best self, just so i can give us a better chance of winning or just playing better,” Black said.

With the losses of Anthony and senior Brandon Robinson (11.8 points), the Tar Heels will have an influx of perimeter additions alongside Black and fellow returnee Andrew Platek.

Redshirt freshman Anthony Harris is still working his way back from a season-ending knee injury in December after playing just five games last year. The 6-4 guard averaged 6.8 points and provided a spark in his limited time last year.

Williams said Harris had yet to gain clearance for full practices as of mid-October, but that he thought the timeline for him to do so was “weeks not months.”

The Tar Heels open against College of Charleston on Nov. 25, then head to the instate mountains to play in the relocated Maui Invitational in Asheville for a three-games-in-three-days tournament.

In December, UNC visits No. 5 Iowa in the ACC/Big Ten Challenge and faces No. 23 Ohio State in the CBS Sports Classic in Cleveland before opening a 20-game league schedule at rival North Carolina State on Dec. 22. 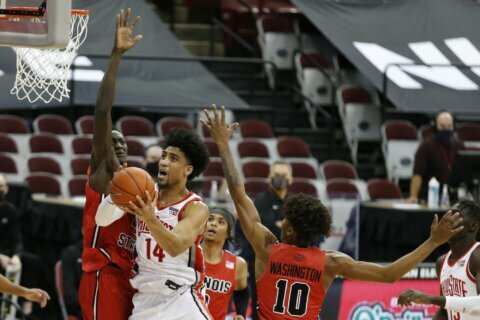