CORONAVIRUS NEWS: CDC to shorten guidance for quarantine | Who will get the vaccine first? | Health tips during the pandemic | Latest test results
Home » College Basketball » Williams looks for improvement…

Williams looks for improvement from Aggies in second season

Texas A&M was expected to be among the worst teams in the Southeastern Conference last season in the first year…
Listen now to WTOP News WTOP.com | Alexa | Google Home | WTOP App | 103.5 FM

Texas A&M was expected to be among the worst teams in the Southeastern Conference last season in the first year under coach Buzz Williams.

Instead, the Aggies won five of their last seven games to finish tied for sixth in the league and earn Williams SEC coach of the year honors.

As he enters Year 2 at Texas A&M, the former Virginia Tech coach knows that most outside his program aren’t expecting much from the Aggies again this year. He isn’t the least bit concerned about it.

“Maybe it’s just part of my evolution,” he said. “I used to get really upset at that sort of stuff and now it’s like whatever.”

He is focused on bringing his energy and culture to the Aggies as he continues to mold the program to his specifications. Williams came to Texas A&M after spending five seasons at Virginia Tech, where he made the NCAA Tournament the last three seasons, capped by a trip to the Sweet 16.

He will try to get the Aggies back to the tournament for the first time since 2018 after they failed to qualify in 2019 before last year’s cancellation of the event because of the coronavirus.

He has also been working on himself. Williams said he tends to be negative and has been trying to see the joy in everything he does, especially in coaching. His wife and staff have helped him, but it remains a work in progress.

“You bypass joy because you’re trying to progress to the next work,” he said. “And what’s the balance or the delicate line of you can still work and have joy and how can you have joy that comes from your work?”

The Aggies lost last year’s leading scorer, Josh Nebo, but added an important new face in graduate transfer Kevin Marfo. The power forward led the nation with 13.3 rebounds per game last season for Quinnipiac. He also averaged 10.2 points and had 10 or more rebounds in 29 of his team’s 30 games.

“Not only is he a high-level talent, but his character and work ethic will be a great addition to our team,” assistant coach Lyle Wolf said. “He fits who we are, and Kevin is going to excel here on multiple levels.”

While the loss of Nebo is a big blow, Texas A&M returns several key players from last year’s team that finished 16-14.

Forward Emanuel Miller is also back after starting 25 games last year and leading the team by averaging 6.3 rebounds as a freshman. A player to watch could be 6-foot-10 forward Jonathan Aku, who showed promise last year in limited playing time.

The Aggies open the season against No. 15 West Virginia on Nov. 25 in the Crossover Classic tournament in South Dakota. After the tournament, Texas A&M will host Tarleton State in its home opener on Dec. 2. They’ll open SEC play on the road against LSU on Dec. 29. 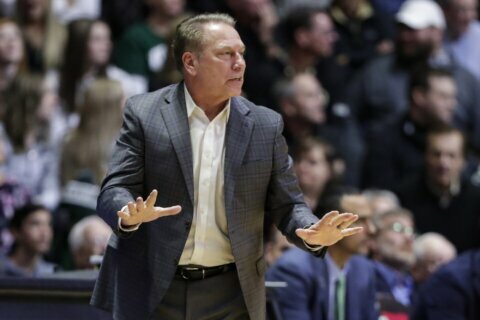 Providence hangs on for 63-62 win over Davidson