Oregon State’s family tree has been shaken a bit now that Tres Tinkle has graduated from his dad Wayne’s program.

But there’s still a Thompson.

Guard Ethan Thompson, son of assistant Stephen Thompson, returns to the Beavers this season after averaging 14.8 points, 4.2 rebounds and 4.5 assists as a junior last season.

But it’s no doubt that the Beavers will miss Tres Tinkle, who finished his career under his father as the school’s all-time leading scorer.

There were hopes that as a senior, Tres Tinkle would help lead the Beavers to an NCAA berth for the first time since 2016. But it wasn’t to be.

The Beavers were about an hour away from leaving their Las Vegas hotel for their Pac-12 tournament game against the rival Ducks when the event was canceled because of the coronavirus pandemic.

At least the Beavers ended last season on a high note. In their opening game of the conference tournament, Oregon State downed Utah 71-69 on Jarod Lucas’ 3-pointer with 1.8 seconds left.

Wayne Tinkle’s daughter, Joslyn, told her father to hold on to the memory of that final win with his son. Joslyn Tinkle played on three Final Four teams while at Stanford.

“I’ll be honest, I was pretty down for our group overall and obviously for our seniors, one of those seniors being my son,” Wayne Tinkle said. “I had so many goals for the team. We had so much momentum going, playing our best basketball at the right time, feeling we were really going to be one of those teams that so often makes their run in the conference tournament to get to the big tournament.”

Even without his son, Tinkle has some solid returning players to lean on this season. In addition to Thompson, Lucas also returns for his sophomore season after averaging 4.6 points per game.

Forward Alfred Hollins, who averaged 5.2 points and 3.0 rebounds, is back for his senior season. So is guard Zach Reichle, who started in all 31 games last season, averaging 7.9 points, 3.3 rebounds and 2.2 assists. Senior Roman Silva, at 7-foot-1, should start.

Thompson declared for the NBA draft, then withdrew his name two days before the deadline and decided to return to the Beavers for his senior year.

Tres Tinkle is awaiting the NBA draft on Nov. 18. He finished his Oregon State career as the program’s all-time leading scorer with 2,233 points. Other records he set include made free throws with 570 and consecutive games in double figures with 96.

Shot-blocking specialist Kylor Kelley has graduated, too, and is also an NBA prospect. He finished his two-year Oregon State career with 211 blocked shots and a 3.4 blocks per game average, both school records.

One player to watch this season will be freshman forward Isaiah Johnson.

“He’s a 6-foot-7 forward who can play a couple of different positions. He’s very athletic and has a high basketball IQ,” Wayne Tinkle said. “What we love most is his motor. Of all of the guys we watched play the last couple of years, his was the most relentless on the court on both ends.”

Like the rest of the league, the Beavers are still trying to hammer out a nonconference schedule. There were a couple of games finalized, but Oregon State was holding off on a formal announcement until the schedule is set.

The league’s teams were dealing with different testing protocols and other local restrictions for nonconference opponents.

However, the Beavers got some clarity last week on a pair of December Pac-12 games. They’ll visit Washington State on Dec. 2 and host USC on Dec. 20. 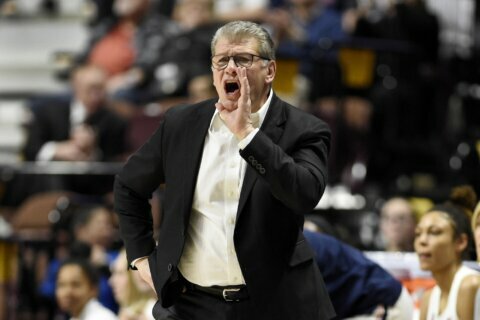