Louisville faces the stiff challenge of bringing together a young roster, a task that has been made more difficult with…
Listen now to WTOP News WTOP.com | Alexa | Google Home | WTOP App | 103.5 FM

Louisville faces the stiff challenge of bringing together a young roster, a task that has been made more difficult with two of its experienced players going down with injuries last week.

Senior forward/center Malik Williams, the Cardinals’ top returning scorer and rebounder is out 12 weeks after re-injuring the right foot that sidelined him for the first four weeks last fall. Graduate transfer Charles Minlend, a guard, is out six weeks with a sprained left knee.

It’s a 1-2 gut punch to a team looking to replace six players, including four starters, and the points they took with them. Now, the newcomers have an opportunity to immediately prove themselves.

“Charles is gonna be a big piece that we’re missing because offensively, that’s another knock-down shooter that we have,” said redshirt freshman forward Jae’Lyn Withers, among 14 underclassmen on Louisville’s roster.

“Defensively, he’s a big part as well as Malik. He gave us more length on the court. Offensively, he was an option that we could go to.”

Louisville (24-7, 15-5 Atlantic Coast Conference) seeks options on both ends of the floor after losing nearly 46 points per game from a squad poised for a deep NCAA Tournament run before the pandemic shut down the postseason.

The leadership void that 6-foot-11 Williams and Minlend were expected to help fill now falls to David Johnson and Samuell Williamson, two of six Cardinal sophomores. Both were regular contributors with Johnson emerging as a potential focal point along with Williams.

Those two along with Withers and guard Carlik Jones, a graduate transfer from Radford, must step up to help ease the youngsters’ transition.

Coach Chris Mack is eager to see where it leads.

“They understand there is a lot of uncertainty,” Mack said during the team’s virtual Tipoff luncheon. “But at the same time, it’s been great. We’ve got a young group, we’ve got a new group.

“What gives me the most confidence is we have a very together group. An unproven group, but guys who generally have a spirit about one another and I think really enjoy playing and competing with each other. Guys are very, very hungry to prove not only as a team what we’re capable of doing, but also individually.”

Some other things to watch in Louisville’s season:

Louisville could receive within days the NCAA’s answer to its response challenging several recruiting violations outlined in a Notice of Allegations this spring. Among them is an allegation that former coach Rick Pitino failed to promote an atmosphere of compliance in his program. Louisville also asked that several violations be reclassified lower and refutes the governing body’s claim that a former Adidas executive and amateur league coach represented the school while funneling illegal payments to recruits.

Sophomore guard David Johnson earned preseason All-ACC honors following a promising debut that featured floor leadership and scoring potential. The Louisville native started four of 27 contests and averaged just 6.3 points, but shot 49% and was third on the team with 75 assists. The Cardinals lost a lot of offense, which might require Johnson to expand his range.

Guard Carlik Jones could be Louisville’s latest graduate transfer to make a mark in his final season of eligibility. The 6-1 Cincinnati native averaged 20 points, 5.5 assists and 5.1 rebounds per game while leading Radford to the Big South Conference regular season title and earning conference player of the year honors. 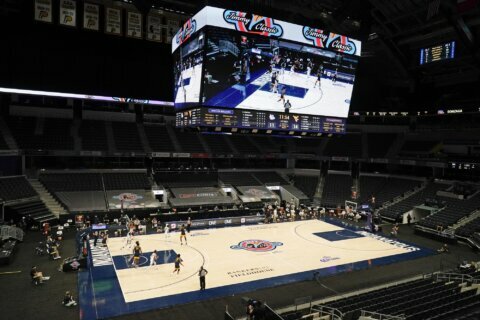 No. 1 Gonzaga vs No. 2 Baylor slam dunked over virus tests