Harper, Young and Mathis lead No. 24 Rutgers past Hofstra

PISCATAWAY, N.J. (AP) — Rutgers has picked up where it left off before the coronavirus ended its season last spring — pushing hard for a long-elusive NCAA Tournament bid.

Rutgers was poised to make the NCAA Tournament for the first time since 1990-91 last year before March Madness was canceled due to the coronavirus.

“Before this year a lot of people said we have gone from hunter to the hunted, but we still have something to prove. We didn’t accomplish anything last year. The season got cut short, so we’re still hungry,” Harper said. “We’re still trying to take care of business every time we step in between those lines, and it’s personal. We got something taken away from us that we worked our whole lives for, so we’re just working even harder to get that back.”

The Pride added two free throws by Isaac Kante after halftime before Rutgers went on a 10-0 run for a 45-32 lead — its largest of the game. The Scarlet Knights led by at least 10 the rest of the way.

Hofstra was led by Jalen Ray with 22 points on 9-of-13 shooting.

While he’s pleased with his team’s start, fifth-year coach Steve Pikiell expected more out of his squad Sunday.

“Offensively today I didn’t like our energy,” Pikiell. “I didn’t love our defense either so it’s a good thing I’ll be crabby for the next few days and it’ll be good for our guys in practice.”

After a 3-0 week to start the season vs. inferior nonconference opponents, Rutgers should stay right where they are in the poll.

With over a week off before the next scheduled game vs. Syracuse in the ACC/Big Ten Challenge on Dec. 8, Rutgers coach Steve Pikiell would like to schedule at least one more game this week.

“If we can figure it out and do it the right time and honestly everything’s about safety, everything’s about how much testing and who’s traveling, who’s not traveling,” Pikiell said. “Our guys have been safe, we’ve been doing a really good job keeping them that way and so all the decisions will be made based on that.”

Big man Myles Johnson had five blocks for Rutgers, which had seven overall.

“If someone’s late off a screen or late off a drive, they know I’m going to be there to help them,” Johnson said. “And hopefully I get more blocks to turn to rebounds that lead to fast breaks, so hopefully blocks turn to offense for us.“

Associate head coach Mike Farrelly is serving as the acting head coach for the Pride with coach Joe Mihalich on temporary medical leave.

Hofstra: The Pride opened their season Sunday after a COVID-19 cancellation at Monmouth. After winning the Colonial Athletic Association for the first time last year, Hofstra was picked to repeat by coaches in the preseason poll. Kante was named to the preseason All-Conference First-Team, and Tareq Coburn and Ray earned honorable mention. However, the squad that went 26-8 last season has to replace its top two scorers, who graduated.

Rutgers: One week into a season where they were ranked in the preseason poll for the first time since 1978-79, the Scarlet Knights are 3-0. After playing low and mid-major teams, the first real test comes next Tuesday, when they host Syracuse. 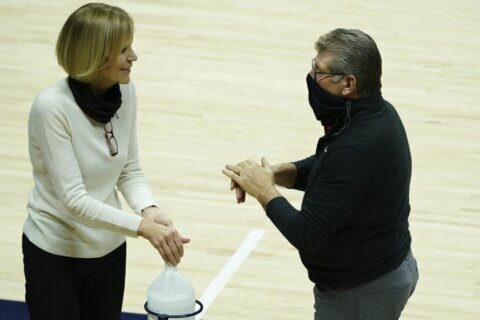