Baylor coach Kim Mulkey has had the same feeling for more than eight months, since the abrupt end of the…
Listen now to WTOP News WTOP.com | Alexa | Google Home | WTOP App | 103.5 FM

Baylor coach Kim Mulkey has had the same feeling for more than eight months, since the abrupt end of the season without the Lady Bears getting to play in the Big 12 tournament or having a chance to defend their 2019 national championship.

“I don’t have an answer for anything. I don’t know science. I don’t know medicine. I don’t know all of that,” Mulkey said. “I read, I watch, I observe and I just shake my head, and all I want is answers. And the answer is when will all of this stop, and none of us seem to be able to come up with an answer.”

The coronavirus pandemic that shut down sports in March is still raging. Big 12 coaches are preparing for a season they expect to be filled with disruptions that aren’t solved by X’s and O’s, whether missing players because of COVID-19 or not being able to play some games.

“Pretty much, I’ve taken the philosophy it is what it is. … Just stay level-headed and stay consistent as much as you can,” said 20th-year West Virginia coach Mike Carey. “I just feel fortunate we’re having an opportunity to play.”

One thing unchanged is fourth-ranked Baylor being the Big 12 preseason favorite, even after losing AP All-America post Lauren Cox and fellow double figure-scoring seniors Te’a Cooper and Juicy Landrum. The Lady Bears were 28-2 and clinched their 10th consecutive conference title before losing their regular-season finale to Iowa State in what ended up the last game of Mulkey’s 20th season at Baylor.

“She’s got the toughness, the competitive spirit, the love of the game to be that kind of player,” Fennelly said of Joens.

Baylor junior guard NaLyssa Smith, who led the Big 12 with her 58.6% field-goal shooting while averaging 14.3 points and 8.0 rebounds a game last season, is the preseason Big 12 player of the year. The Lady Bears also have top newcomer DiJonai Carrington, the former All-Pac-12 guard from Stanford.

Versatile senior DiDi Richards, one of the nation’s top defenders expected to take over at point guard, is recovering from a spinal nerve injury in a midair collision with teammate Moon Ursin during practice October 24. The incident initially left Richards without any feeling in her lower legs.

“She’s not by any means cleared to play basketball,” Mulkey said. “But, if you asked me two weeks ago and then today, the difference is unbelievable on what she’s able to do now.”

Vic Schaefer took Mississippi State to the national championship game twice before returning home to Texas as coach of the Longhorns.

“All I did was jump out of the frying pan into the grease, coming from where I came from to the Big 12,” Schaefer said.

Schaefer was born in Austin, but went to Texas A&M and was on the Aggies staff with coach Gary Blair when they were still in the Big 12 and won the 2011 national championship. Texas won its only national title in 1986, and last went to the Final Four in 2003.

“We absolutely want to get it back to being a top 10 program, a national championship-caliber team. But we do have a lot of steps that we’ve got to to get through” Gerlich said. “The fact that we’ve had some tradition in it in the past, I think certainly helps us.”

— Vivian Gray, a two-time All-Big 12 guard at Oklahoma State while averaging nearly 20 points a game the past two seasons, joined Texas Tech as a graduate transfer who is immediately eligible.

TCU seventh-year coach Raegan Pebley said she has a different mindset and a complete clean bill of health after surgery in June to remove a benign brain tumor that was discovered 2 1/2 years ago.

“You go through different things in life, right, and you get reminders of all the different things you were taking for granted, even though you tried not to,” Pebley said. “The grace that God’s shown to me, I didn’t deserve one bit of it. And it just came to me in an abundance and continues to come to me.” 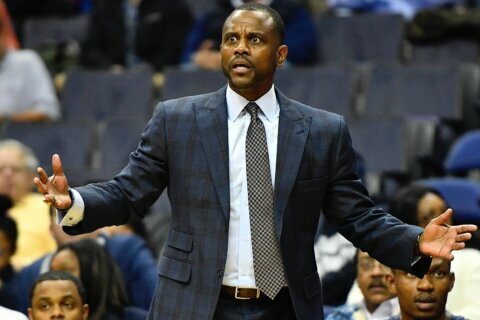