For the first time in seven years, the UConn and Notre Dame women’s basketball teams won’t play in the regular season.

The schools announced Monday that the game was postponed because the Irish need to restructure their schedule due to the COVID-19 pandemic.

The perennial powers and former conference rivals extended their series last year through the 2023-24 season. That has been pushed back a year, with UConn hosting games next season and in 2023-24. The Irish will host the games in the other two years.

UConn coach Geno Auriemma said last week on a zoom call that he anticipated UConn playing all of its marquee non-conference games that included Baylor, Notre Dame, South Carolina and Tennessee. None of those games had been officially confirmed yet, as conferences are still trying to figure out their schedules.

Teams are allowed to play only 25 regular-season games because of the coronavirus. While most conferences haven’t released their schedules yet, the ACC is expected to go to a 20-game conference schedule — up from 18.

UConn and Notre Dame have been the top rivalry in women’s basketball over the past decade. There was a stretch when both teams were in the Big East and they played 12 times over a three-year period from 2011-13.

Both teams left the conference the next season and didn’t play until the national championship game when the two squads were undefeated. UConn won that game to cap off a 40-0 year. Including postseason, the last time the teams did not face each other in a season was 1994-95.

UConn holds a 38-13 all-time advantage in the series, including an 81-57 victory at home last December in the most recent meeting. It was the final time that Auriemma and Notre Dame coach Muffet McGraw would meet on the court. McGraw stepped down as coach and was replaced by longtime assistant Niele Ivey in April. 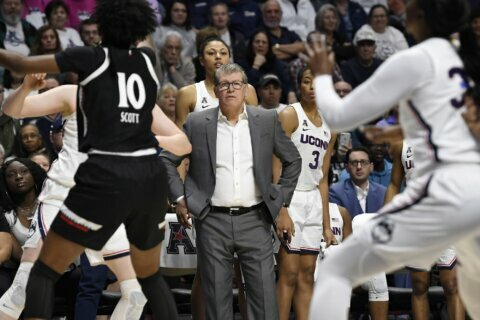 Back in the Big East, UConn women favorite to win title