Consolation prize: Clemson knocks off No. 3 Duke in hoops

Clemson gave its weary fans something to celebrate a night after losing the national championship game in football, getting a career-high 25 points from Aamir Simms in a 79-72 upset of No. 3 Duke on Tuesday night.
Listen now to WTOP News WTOP.com | Alexa | Google Home | WTOP App | 103.5 FM
(1/9) 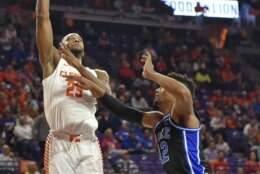 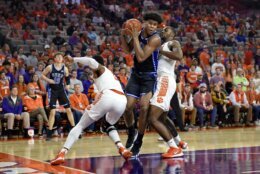 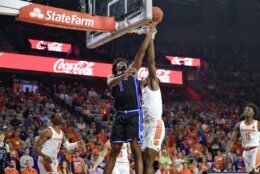 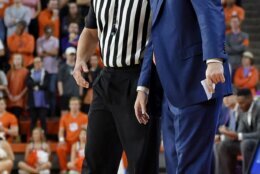 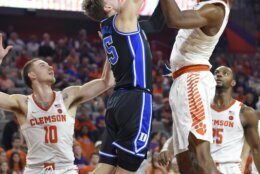 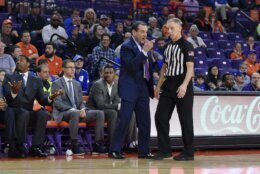 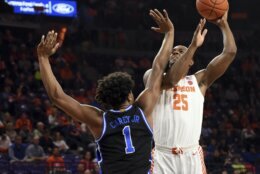 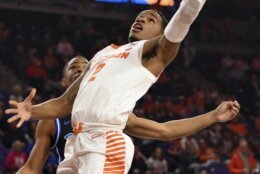 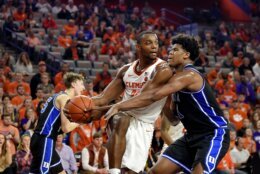 CLEMSON, S.C. (AP) — What a wild ride the past four days have been for Clemson fans.

The Tigers beat No. 3 Duke 79-72 on Tuesday night to sandwich wins over the Atlantic Coast Conference’s basketball blue bloods around Monday’s loss in the College Football Playoff title game.

Tuesday night’s win over the Blue Devils was the highest-profile upset for the Tigers (9-7, 3-3 ACC) since they beat No. 1 North Carolina on their home court in February 2001. And just like that day, students rushed the court at Littlejohn Coliseum.

On Saturday, Clemson beat North Carolina in Chapel Hill for the first time in program history, ending a 59-game losing streak on the Tar Heels’ home court and setting off a locker room celebration that looked like the aftermath of an NCAA Tournament win. The Tigers have won three in a row since falling below .500 in a Dec. 31 loss to Miami.

“2020 is starting to feel like our year,” said Aamir Simms, who led Clemson with a career-high 25 points.

The Blue Devils (15-2, 5-1 ) came into the game as 10 1/2-point favorites and were leading the nation with an average margin of victory of 21.5 points. Duke had not lost since a stunning home defeat to Stephen F. Austin in November.

Clemson fans, stung by the football Tigers’ first loss in 30 games — a 42-25 defeat against LSU Monday night at the Superdome in New Orleans — stopped moping less than 24 hours later. Duke never had a bigger lead than 4-0 and Clemson led for more than 28 minutes.

“We tried to move their guys around a lot. They have a lot of size,” Clemson coach Brad Brownell said.

That opened up the lane for Clemson’s offense. Seventeen of the Tigers’ 30 baskets were layups or dunks — including one by John Newman III that was so nasty it got a shout-out on Twitter from Magic Johnson.

“Simms was spectacular tonight in how he controlled the game,” Duke coach Mike Krzyzewski said.

Clemson led 40-33 at halftime and stretched the lead to nine points before Duke rallied. The Blue Devils led 62-59 with 6:40 remaining.

That’s when Clemson took control with a 14-3 run, including eight points from Simms. His three-point play made it 73-65 with 2:16 remaining.

Mack finished 10 of 14 from the field. Simms was almost as efficient, shooting 10 of 15, and he had nine rebounds and five assists.

Duke: The Blue Devils’ defense, ball control and free throws betrayed them. Clemson shot 56.6%, far better than anyone else against Duke this season. Duke also turned the ball over 15 times and made just 10 of 20 free throws.

Clemson: The obituaries for the Tigers’ season written after a 73-68 overtime loss to Miami were premature. Clemson has won three in a row, shooting at least 43% in each game. And beating North Carolina and Duke back-to-back is every ACC fan’s dream.

Clemson has only beaten North Carolina and Duke in back-to-back games once before — in 1990 on the way to the Tigers’ only regular-season title in 67 ACC seasons.

Add the win Jan. 4 over North Carolina State and Clemson has beaten the three ACC teams from the Raleigh-Durham-Chapel Hill area in consecutive games for the first time since 1967. The Wolfpack win came between victories over the Blue Devils and Tar Heels that year.

Krzyzewski said the Blue Devils missed more from the sophomore than just his seven points a game. He also averages 15 minutes, spelling Jones and and others in key stretches.

“Not having what we have had hurts us. And we’re not going to have it for a little bit,” said Krzyzewski, who isn’t sure if Baker will return for Saturday’s game against No. 11 Louisville.

Not only did Brownell beat the highest ranked team in his 10 years at Clemson on Tuesday night, he also became the winngest coach in Tigers history.

“I’m honored. There have been a lot of good coaches here,” Brownell said.

Duke got jumped by Baylor in this week’s AP Top 25 to fall to third. The Blue Devils will likely drop further.

Duke: The Blue Devils host No. 11 Louisville on Saturday with first place in the ACC on the line.