BOTTOM LINE: Chattanooga looks for its ninth straight win over Samford at McKenzie Arena. The last victory for the Bulldogs at Chattanooga was a 78-54 win on Feb. 10, 2010.

SAVVY VETERANS: Senior leadership could play a big role in this game’s outcome. Matt Ryan, David Jean-Baptiste, Ramon Vila, Rod Johnson and Stefan Kenic have combined to account for 70 percent of Chattanooga’s scoring this season. For Samford, Josh Sharkey, Jalen Dupree and Brandon Austin have collectively scored 54 percent of the team’s points this season, including 59 percent of all Bulldogs points over their last five.

DEFENSIVE IMPROVEMENTS: The Bulldogs have allowed just 70 points per game to conference opponents thus far, an improvement from the 83.2 per game they allowed in non-conference play.

CREATING OFFENSE: Sharkey has either made or assisted on 60 percent of all Samford field goals over the last five games. The senior guard has accounted for 37 field goals and 44 assists in those games.

ASSIST DISTRIBUTION: The Mocs have recently gotten buckets via assists more often than the Bulldogs. Chattanooga has 42 assists on 77 field goals (54.5 percent) across its previous three outings while Samford has assists on 33 of 77 field goals (42.9 percent) during its past three games. 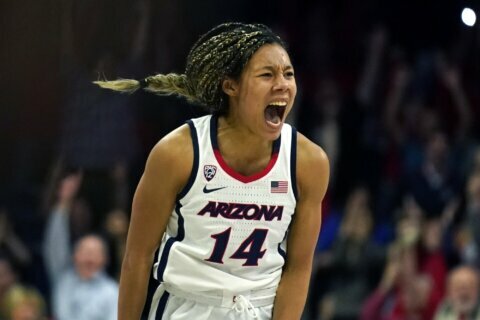 No. 13 Arizona women outlast No. 4 Stanford in overtime