Baylor jumps Zags to give AP poll record-tying seventh No. 1

Baylor and Gonzaga were the only two teams in the top five that took care of business last week. That…
Listen now to WTOP News WTOP.com | Alexa | Google Home | WTOP App | 103.5 FM

Baylor and Gonzaga were the only two teams in the top five that took care of business last week.

That doesn’t mean they didn’t move around, too.

The Bears (15-1) leaped over the Bulldogs and into the No. 1 spot in The Associated Press men’s college basketball poll on Monday, using wins over Iowa State and Oklahoma State to give the Top 25 its seventh team on top this season. That matches the record set in 1983 for the most No. 1s in the history of the poll, which dates to the 1948-49 season.

Gonzaga (20-1) was merely a victim of its conference schedule. The Bulldogs blew out Santa Clara and BYU, but just enough voters considered those wins to be less impressive than the Bears’ perfect Big 12 start. Baylor received 33 first-place votes and had 1,591 points from the 65-member media panel while Gonzaga received 31 first-place votes for 1,588 points.

“It takes a team to win,” said Baylor coach Scott Drew, whose team also reached the top of the poll two years ago. “As a coach, you’re just really proud when different people step up, especially guys that have been working hard.”

The rest of the top five looks a whole lot different after Duke, Auburn and Butler all lost both of their games last week.

Kansas (14-3) rose three spots to No. 3 after victories over Oklahoma and Texas, the latter requiring a big comeback in Austin. San Diego State (19-0) remained perfect with wins over Fresno State and Nevada, and Florida State (16-2) barged into the fifth spot after it beat reigning national champion Virginia and survived overtime to best Miami.

The Seminoles haven’t lost since playing Indiana in the Big Ten-ACC Challenge the first week of December.

Louisville, which tasted the top spot earlier this season, jumped five spots to sixth after beating Pittsburgh in overtime and handling the Blue Devils. Dayton was next, followed by Duke, Villanova and Seton Hall to round out the top 10.

“We just have to get older,” he said after the Blue Devils’ 79-73 loss to the Cardinals on Saturday at Cameron Indoor Stadium. “I’m really up on my team. It’s a long journey. I’ve never told you that we’re great. It’s a process for us, playing these two teams. Getting beat, we have to learn from it and move on. It’s a long journey.”

Krzyzewski’s team wasn’t alone in getting a tough lesson last week. Fourth-ranked Auburn fell all the way to No. 16 after losing a pair of blowouts to Alabama and Florida, and fifth-ranked Butler was bounced all the way to 13th after the Bulldogs followed up a loss to Seton Hall by getting soundly beaten by DePaul.

“It’s the time of the year when we should be trying to elevate our play, and we’re not,” said Tigers coach Bruce Pearl, whose team had won its first 15 games. “Obviously, there’s a pretty big price on our head being ranked fourth in the country. And so I think we have to respond to the step-up that we saw this week from both Alabama and Florida.”

Here’s a closer look at the other big news in another fresh Top 25:

RUTGERS ON THE RISE

The Scarlet Knights bounced back from a loss to Illinois by beating Indiana and Minnesota at home, running their record at the RAC to 13-0 this season — the best start in school history. That was enough to get Rutgers (14-4) into the poll at No. 24 for the first time since the final poll of the 1978-79 season. And with Seton Hall at No. 10, the state of New Jersey has two teams ranked for the first time since the Pirates were joined by Princeton in the last poll of the 1990-91 season.

Iowa, which has been in and out of the poll all season, made the biggest jump back in at No. 19 after its win over then-No. 19 Michigan. The Hawkeyes were joined by No. 22 Arizona — which beat a ranked team in Colorado — and No. 25 Houston, which romped through SMU and then-No. 16 Wichita State last week.

ON THE WAY OUT

The Shockers dropped all the way out after losing to Houston and Temple. The Wolverines also fell out, along with Big Ten rival Ohio State and Creighton, whose one-week stay ended with a loss early last week to Georgetown.

No team has been falling as steadily as Ohio State, which was 9-0, was ranked in the top five and received first-place votes just six weeks ago. The Buckeyes have lost six of their last nine games, and five of their last six, to complete their tumble from the poll. Their lone victory in the last few weeks was against lowly Nebraska. 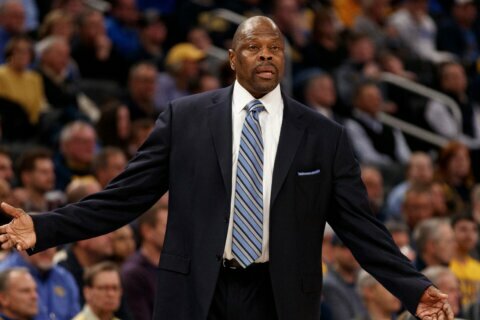 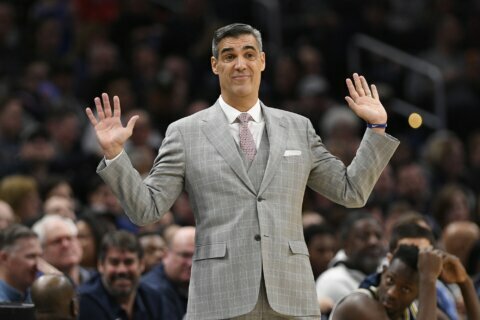 Villanova top choice in Big East ahead of Creighton 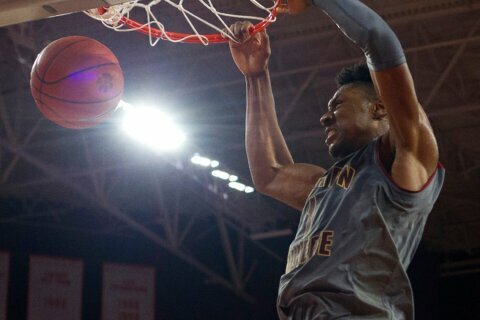