Chol Marial was welcomed with an ovation in his college debut and dunked less than a minute after entering as the 13th-ranked Terrapins beat Bryant 84-70 Sunday.

The 7-foot-2 center from South Sudan has finally arrived.

Marial was welcomed with an ovation in his college debut and dunked less than a minute after entering as the 13th-ranked Terrapins beat Bryant 84-70 Sunday.

“I think I was too hyped,” Marial said. “That crowd at my back and to play on the big stage like that is really hyped. But I was not nervous.”

Marial had six points and five rebounds in 14 minutes in his delayed debut for the Terrapins (11-2), while Anthony Cowan Jr. scored 19 points as Maryland ended a two-game slide in the nonconference finale for both teams.

Aaron Wiggins added 15 points and Jalen Smith had 11 points and 10 rebounds for his eighth double-double of the season.

Adam Grant scored 25 points for the Bulldogs (8-5), who had won four in a row and have never beaten a ranked team. The Terps outrebounded Bryant 48-16 and snared 19 offensive boards to the Bulldogs’ 12 defensive rebounds.

“They pounded us on the glass,” Bryant coach Jared Grasso said. “It’s all we talked about coming in, but you can’t match in practice the size and athleticism they bring. The numbers on the backboard were huge.”

Maryland led 36-31 at the break, but Bryant was still within six points with less than 12 minutes to play. The Terps rattled off eight consecutive points, and the Bulldogs never got within 10 the rest of the way.

Marial’s first game was the day’s most riveting development, and an especially welcome one for Maryland after freshman twins Makhi and Makhel Mitchell opted to transfer Friday.

Marial had surgery to correct stress fractures in both legs in September. He entered with 13:07 left in the first half, and by the time he exited a little more than four minutes later, he had four points (on two dunks) and three rebounds.

The Terps used him alongside the 6-10 Smith for stretches in both halves, a preview of a potential lineup they could lean on more in Big Ten play. Marial’s ease at moving up and down the floor and ability to fit into Maryland’s defense suggested little anxiety.

Quite the contrary, actually.

“When you’re 7-2 and you can just drive it in, there’s not much nerves are going to do at that point,” Cowan said.

Marial savored his first taste of the college game, perhaps appreciating it even more because of the injuries that bedeviled him over the last several years.

“It was hard, but I didn’t take it in a bad way,” Marial said. “It was just a learning process. I knew I had a lot of good people around me, so I didn’t have to worry about anything.”

Bryant: The Bulldogs have made a habit of pestering Big Ten teams under Grasso, and Sunday was no different. Bryant lost by five at Iowa exactly a year earlier, and dropped a two-point decision at Rutgers on Nov. 7. The Bulldogs fell to 0-13 all-time against the Big Ten.

Maryland: The Terps’ trademark slow start was somewhat understandable since they had played just twice in the previous three weeks. Still, Maryland will need to be sharper from the beginning of games as it dives into the bulk of its Big Ten schedule in the coming weeks.

With such a light week across the country, Maryland is unlikely to move much in either direction after snapping its two-game skid. 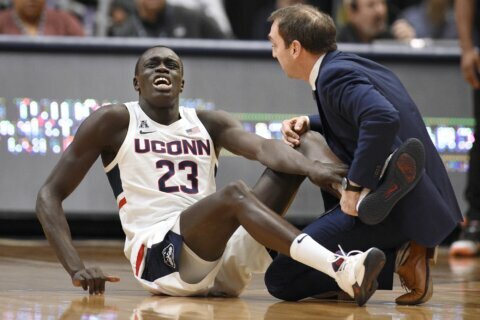 UConn’s Akok out for season with torn left Achilles tendon

VCU looks for home win vs No. 5 Dayton