BOTTOM LINE: No. 1 Duke presents a tough challenge for Winthrop. Winthrop has played a ranked team only once this season and won. Duke lost 85-83 in overtime to Stephen F. Austin on Tuesday.

YOUTH MOVEMENT: Each of these teams has relied heavily on their freshmen this year. Vernon Carey Jr., Cassius Stanley, Wendell Moore Jr. and Matthew Hurt have collectively accounted for 61 percent of Duke’s scoring this season. For Winthrop, Josh Ferguson, D.J. Burns and Russell Jones have combined to account for 43 percent of the team’s total scoring.

FACILITATING THE OFFENSE: Tre Jones has either made or assisted on 43 percent of all Duke field goals over the last three games. The sophomore guard has accounted for nine field goals and 26 assists in those games.

PASSING FOR POINTS: The Blue Devils have recently created baskets via assists more often than the Eagles. Duke has 52 assists on 81 field goals (64.2 percent) across its previous three games while Winthrop has assists on 68 of 108 field goals (63 percent) during its past three games.

DID YOU KNOW: Duke has attempted the 10th-most free throws in all of Division I. The Blue Devils have averaged 26.3 free throws per game and 33.3 per game over their last three games. 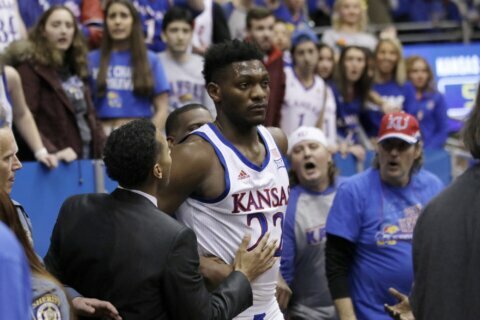 No. 3 Kansas’ victory over Kansas State ends in wild brawl

Clemson rallies from 10 points down to top Deacons 71-68