The size and standards of the vice president’s security detail also required adjustments. The guards protecting Pence got backup from a police force that only allows elite “Viking SWAT” members carry guns.

Icelandic authorities gave U.S. personnel special permission to carry firearms. Bomb-sniffing dogs were cleared to enter the country because of a strict quarantine for imported animals.

Pence is the first U.S. vice president to visit Iceland, a country of just 350,000 people, since George H.W. Bush came to Reykjavik in 1983.

But Helgi Hafsteinsson, an employee at a gas station in Keflavik, welcomed the heavy traffic caused by Pence’s visit.

“It is great for business,” he said.

All the moving parts required for the vice president’s safety tied up transportation in the capital. Police closed off main roads to accommodate the convoy that drove from the airport to Reykjavik.

Drivers lamented the traffic on social media. Satirical newspaper Fréttirnar mocked that “Americans intended to give every Reykjavik citizen a paralyzing drug during Pence’s visit.”

Helicopters hovered over the government building where Pence met with Icelandic eland’s officials as snipers perched on neighboring rooftops.

Ahead of Pence’s arrival, three CV-22B Osprey flew over southwestern Iceland, along with two C-130 Hercules and one Lockheed C-5 Galaxy. 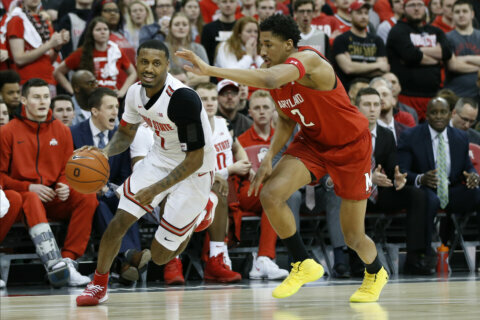