BOTTOM LINE: No. 6 Nevada presents a tough challenge for San Diego State. San Diego State has played a ranked team only once this season and lost. Nevada has moved up to No. 6 in the latest AP rankings following a win over Wyoming last week.

TEAM LEADERS: The rugged Jalen McDaniels has averaged 17.2 points and 8.6 rebounds to lead the charge for the Aztecs. Devin Watson is also a key facilitator, putting up 16.4 points and 4.4 assists per game. The Wolf Pack have been led by Jordan Caroline, who is averaging 18.8 points and 9.8 rebounds.

DEFENSIVE IMPROVEMENTS: The Aztecs have given up only 66.8 points per game across 12 conference games, an improvement from the 72.4 per game they allowed to non-conference foes.

JUMPING FOR JORDAN: Caroline has connected on 43.5 percent of the 92 3-pointers he’s attempted and has made 7 of 15 over the last three games. He’s also converted 66.7 percent of his foul shots this season.

PERFECT WHEN: San Diego State is a perfect 8-0 when it holds an opponent to 60 points or fewer. The Aztecs are 8-9 when opponents score more than 60 points.

DID YOU KNOW: Nevada has committed a turnover on just 14.1 percent of its possessions this season, which is the second-best percentage among all Division I teams. The Wolf Pack have turned the ball over only 10 times per game this season. 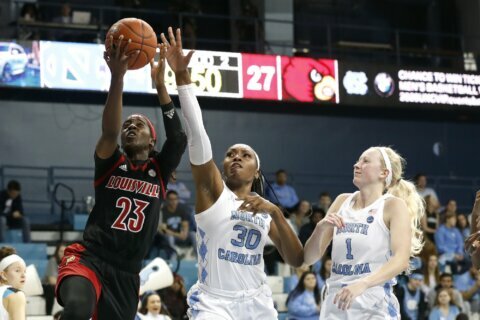