James scored a season-high 39 points and grabbed 11 rebounds as the Los Angeles Lakers escaped with a 143-138 victory over the San Antonio Spurs on Saturday night.

“We gave up a ton in transition, we turned the ball over, couldn’t get a defensive rebound at times,” Lakers coach Darvin Ham said. “But again, when you’re able to score the ball, it covers up for a lot of mistakes.”

James matched a career high with seven 3-pointers. He finished 11 for 21 from the field, including a booming one-handed dunk on a lob from Russell Westbrook with a minute remaining in the first half.

While James was playing in his second game following a five-game absence, Los Angeles center Anthony Davis sat out with a bruised left calf he sustained in Friday’s victory over San Antonio.

“We still honed in and do what we do best,” former Spurs guard Lonnie Walker IV said. “And LeBron took us home, he took us to victory.”

The Lakers (7-12) have defeated the Spurs three times in a seven-game span.

Dennis Schroder had 21 points and six assists for Los Angeles. Walker had 19 points, including 13 in the fourth quarter to help seal the Lakers’ fifth victory in six games.

Keldon Johnson had 26 points and 10 rebounds for San Antonio. Tre Jones added 23 points and 13 assists, and Devin Vassell had 19 points.

After trailing the entirety of Friday’s loss, San Antonio scored the game’s first points on a short jumper by Jakob Poeltl. It was the Spurs’ first lead since Nov. 20 against the Lakers.

“They have got great character,” San Antonio coach Gregg Popovich said. “I thought they were fantastic. I am proud of them. They just keep playing. It doesn’t matter what the score is, or who is there or who is not there, they are unbelievably coachable and they are trying very hard to do what we want them to do. I was just thrilled and proud of them tonight.”

The momentum stalled when the Spurs lost two starters to right quadriceps injuries in the second quarter.

Poeltl had 12 points and nine rebounds in 10 minutes before exiting the game with 7:59 left in the first half. Poeltl felt soreness after landing awkwardly on a dunk.

San Antonio then lost rookie forward Jeremy Sochan with 4:54 remaining in the first half. Sochan took a knee to his right thigh when his layup attempt was blocked by Thomas Bryant.

The Spurs also lost reserve center Zach Collins to an ejection for a flagrant foul on Westbrook with two minutes left in the third quarter.

Lakers: Westbrook suffered a deep cut at his hairline after taking a right elbow from Collins. After rebounding his own missed layup, Westbrook faked a follow and Collins leapt and came crashing down on him. Westbrook began bleeding profusely immediately but quickly rose from the court to confront Collins. Westbrook was issued a technical foul but Collins was ejected after video review. … G Patrick Beverley served the second game of a three-game suspension for forcefully shoving Phoenix center Deandre Ayton from behind in Tuesday’s loss.

Spurs: San Antonio’s longest losing streak is 13 straight in 1989 followed by 10 straight in 1987 and nine straight in 1989. The Spurs have lost eight straight in five other seasons, including 2020 and 1989. San Antonio finished 21-61 in 1989, the final season of David Robinson’s two-year commitment to the Navy before joining the Spurs. … G Josh Richardson missed his third straight game with a sprained right ankle.

Spurs: At Oklahoma City on Wednesday. 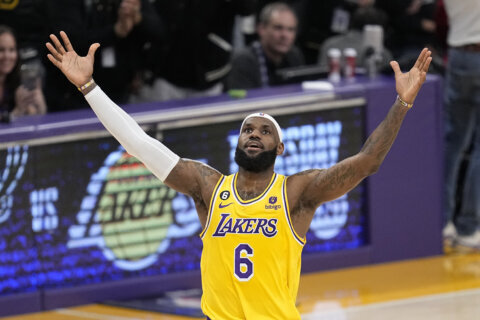 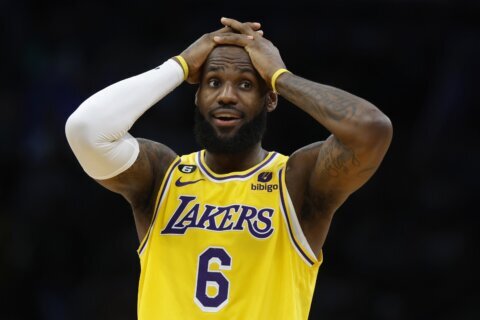