Jason Hart has been making the comparison for about a year now. When the coach of the G League Ignite…
Listen now to WTOP News WTOP.com | Alexa | Google Home | WTOP App | 103.5 FM

Jason Hart has been making the comparison for about a year now. When the coach of the G League Ignite sees Scoot Henderson, a certain NBA player comes into his mind.

That’s high praise. And a high standard. Rose was a No. 1 draft pick, Rookie of the Year, an MVP and a perennial All-Star before injuries changed his trajectory. Still, Hart hammers away on the comparison because he wants Henderson — who is perhaps the only other person besides Victor Wembanyama meriting real consideration for the No. 1 pick in the 2023 draft — to keep getting better.

The G League’s 22nd season kicks off Friday night, and the biggest draw in the league might be an 18-year-old who already looks very NBA-ready. Henderson is the point guard for the G League Ignite, the team that exists to develop young prospects in preparation for the NBA draft. It has featured three eventual top-10 picks— Jalen Green and Jonathan Kuminga last year, Dyson Daniels this year — in its first two seasons.

“Control what you can control, that’s how I look at it,” Henderson said. “As long as I’m here, doing what I’ve got to do, doing what I’m destined to do — and that’s putting into work every single day, being a good guard and being a good person — that’s controlling what I can. I’m not going to draft myself to be No. 1. I feel like I’m in that conversation to be No. 1, because that’s just my competitive spirit. But I’m going to just control what I can control.”

Wembanyama is 7-foot-3, only 18 years old, and has skills and shooting range of a guard. If there was draft polling going on, he’d be the runaway favorite to be No. 1 next June.

But Henderson more than held his own when they first played last month. Wembanyama and his French team, Metropolitans 92, came to Henderson, Nevada for a pair of exhibitions against the Ignite.

Henderson won the first head-to-head battle, at least on the scoreboard: He scored 28 points and was dynamic, doing enough so that Wembanyama’s 37-point night wouldn’t keep the Ignite from prevailing. The Ignite won that one, 122-115.

Two days later, they met again. Forget head-to-head; that one ended knee-to-knee, when Wembanyama and Henderson collided. Henderson left with, thankfully, nothing more than a bruise, Wembanyama scored 36 and the French club ended up leaving Las Vegas with a split.

“Their names are kind of tied together now,” Hart said. “Hopefully they can use this and create like a friendship to where they’ll be at each other’s weddings because it’s something they’re always going to be tied to. That’s the beauty of basketball. It brings people together. Scoot and Victor. Victor and Scoot.”

Wembanyama is back in France now, finishing his season.

And after about a month off following those exhibitions, Henderson is ready to resume showing why he thinks he’s No. 1.

“Every time the ball is in his hands, you feel something on the court,” Wembanyama said.

“I still have areas of my game where I feel I need to get better,” Henderson said. “That’s what I’m going to do.”

It’s a 50-game schedule for each of the league’s 30 teams. The Ignite are playing a full schedule for the first time this year, as are the Mexico City Capitanes.

The first phase of the season is an 18-game Showcase Cup tournament that culminates with a single-elimination tournament to crown a champion at the Winter Showcase from Dec. 19-22.

The 32-game regular season starts Dec. 27. The top six teams in each conference go to the playoffs. 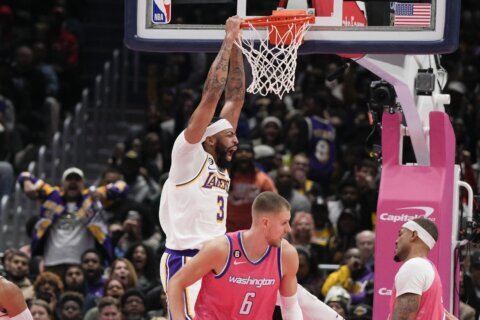