Serge Ibaka staying with Bucks; agrees to terms on deal

MILWAUKEE (AP) — Serge Ibaka is staying with the Milwaukee Bucks.

The Bucks announced Tuesday that they have re-signed the 32-year-old center, who came to Milwaukee as part of a four-team deal at the Feb. 10 trade deadline. Terms of the deal weren’t released.

“Serge is an elite defender and shot blocker who will continue to add depth for us at center,” Bucks general manager Jon Hors said in a statement. “He was a valuable acquisition for us last season, and we look forward to having him back in Milwaukee.”

Ibaka averaged 7 points, 5.3 rebounds and 17.8 minutes in 19 games with the Bucks last season.

The Bucks acquired Ibaka while starting center Brook Lopez was still recovering from a back injury that required surgery and caused him to play just 13 regular-season games this past season. Ibaka’s playing time diminished after Lopez returned to action.

Milwaukee sent guard Donte DiVincenzo to the Sacramento Kings and forwards Rodney Hood and Semi Ojeleye to the Los Angeles Clippers in the deal that brought them Ibaka as well as a pair of second-round draft picks and cash.

Ibaka averaged 6.6 points and 4.3 rebounds in 35 games with the Clippers before getting traded.

The three-time All-Defensive first-team selection led the NBA in total blocks four straight seasons while playing for the Oklahoma City Thunder. He led the league in blocks per game in 2011-12 and 2012-13. His 1,752 career blocks rank him second among all active players, behind only Dwight Howard. 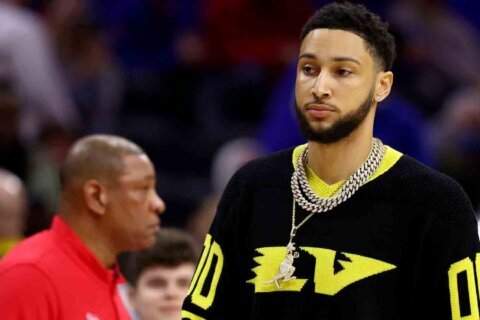