Serbian forward Nikola Jovic was selected by the Miami Heat with the 27th pick in Thursday’s NBA draft.

The 19-year-old was born in England and moved to Serbia when he was 9. He has played for Mega Basket in the Serbian league, averaging 11.7 points on 43% shooting in that league this past season.

Jovic has already been to a game in Miami, attending a playoff game this spring.

“I was in Miami for almost one month when I came for the draft process,” Jovic said. “I think the city is great — nice weather, perfect weather. I met a lot of people there, really good people. So I like Miami, yeah. The funny thing is, it’s the first city I came to when I came to USA, so I think it’s a perfect one.”

“It would be crazy,” Jovic said.

Miami was the No. 1 seed in the Eastern Conference this past season and went to the conference finals, losing a Game 7 at home to eventual NBA runner-up Boston. The Heat have most of their key pieces under contract for next season, and in many cases beyond, with the core of Jimmy Butler, Bam Adebayo and Kyle Lowry all with multiple years left.

History has shown the No. 27 selection can prove to be a good one. There were five players this past season — all 27th picks — who averaged at least 10 points a game, that list being Toronto’s Pascal Siakam, Washington’s Kyle Kuzma, Utah’s Rudy Gobert, Atlanta’s Bogdan Bogdanovic and Boston’s Robert Williams.

Some have even gotten to the Hall of Fame after being drafted 27th, with Dennis Rodman getting enshrined in 2011. Also in the Hall: the player who was the No. 27 pick in the 1964 draft — John Thompson, who didn’t make it for averaging 3.5 points in 74 games with the Celtics, getting there instead for his legendary coaching career at Georgetown.

The Heat do not have a second-round selection. They had to forfeit what would have been their second-rounder this year after the NBA determined they broke league rules regarding timing of free-agent negotiations while working on the deal that brought Lowry to Miami last summer.

Chicago was found to have committed a similar offense last summer as well — in its case, the negotiations led to the deal that brought Lonzo Ball to the Bulls — and also had its second-rounder this year taken away. Those forfeitures by the Heat and Bulls are why this draft is composed of only 58 picks instead of the customary 60. 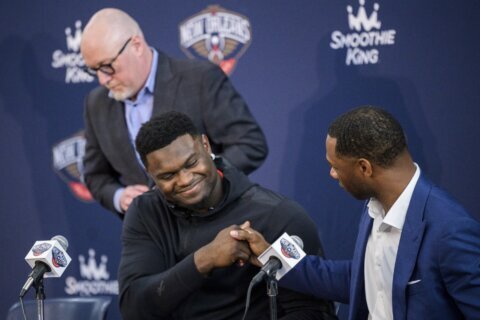