For Jaylen Brown, NBA Finals is bit of a homecoming

SAN FRANCISCO (AP) — Jaylen Brown is starting the NBA Finals on the road. Except it might seem like a…
Listen now to WTOP News WTOP.com | Alexa | Google Home | WTOP App | 103.5 FM

SAN FRANCISCO (AP) — Jaylen Brown is starting the NBA Finals on the road. Except it might seem like a homecoming for him, in a couple of ways.

Brown plays for the Boston Celtics, who will visit the Golden State Warriors for Games 1 and 2 of the NBA Finals, which start Thursday night. Brown played his one year of college basketball just on the other side of San Francisco Bay at Cal.

If that wasn’t enough, one of his teammates with the Bears that season was Nick Kerr — the son of Golden State coach Steve Kerr. It all played a role in giving Brown his introduction to the NBA.

Now here he is, playing against the Warriors for a title.

Golden State’s Klay Thompson can relate. He grew up a Los Angeles Lakers fan, which means he’s basically obligated to have a certain disdain for the Celtics. And when he was a rookie, playing against a Boston team that featured Ray Allen, Paul Pierce and Kevin Garnett, Thompson had what he calls his “welcome to the NBA” moment.

“Just a couple years before, I was watching them battle Kobe (Bryant) and Pau (Gasol) in the finals, and I was just mesmerized by how great those teams were, both the Lakers and the Celtics,” Thompson said. “So life comes full circle, now being able to play them in the finals.”

For the record, Thompson wasn’t star-struck that first night against Boston. In that game, he led the Warriors with 26 points — although Boston prevailed 105-103.

Steve Kerr, like Thompson, is a California kid. He was in the last row of upper-deck seats of the old Forum for one of those Lakers-Celtics finals matchups, the mystique of it all not lost on him.

“Some of my favorite memories as a player were playing in Boston Garden,” Kerr said. “I remember starting a game early in my career — we had a couple guys injured — and going out to half court and bumping fists. Larry Bird actually said, ‘Good luck, Steve.’ I was like, ‘You too, Larry.’ I was like, ‘What is happening right now?’ It was surreal.”

Kerr had 10 points and eight assists that night for Phoenix. Bird had 29 and the Celtics won.

The ties between the teams even extend to ownership. Warriors Co-Executive Chairman and CEO Joe Lacob grew up in Massachusetts and was a minority owner of the Celtics for five years — including the 2008 title year — before buying the Warriors.

“I grew up in the 60s in a place called New Bedford, Mass., until I was about 13 years old,” Lacob said. “And you know, I was listening with a transistor radio by my ear to the Celtics and Sam Jones and K.C. Jones and John Havlicek and all these guys, Bill Russell. So, it certainly has a place in my memory banks and in my heart.”

Golden State could pull off a rarity: winning the NBA championship after not winning its division.

Each of the last 10 NBA champions has also won its division that season; the last division nonwinner to claim the title was Dallas in 2011.

The Warriors finished 11 games behind Phoenix in the Pacific Division this season.

Boston could keep the streak of division-winning champions alive. The Celtics tied for the Atlantic Division title.

This could be a good omen for the Warriors.

Just like last season, the NBA Finals has a No. 2 seed (Boston) facing a No. 3 seed (Golden State). A 2 vs. 3 matchup has happened four other times in the finals since the NBA went to its current playoff format in 1984.

And all four times, No. 3 beat No. 2. Milwaukee did it to Phoenix last year, Dallas over Miami in 2011, San Antonio over Cleveland in 2007 and Detroit over the Los Angeles Lakers in 2004.

There are no first-time NBA Finals referees in the field of 12 who were picked to work this series.

Foster has officiated 22 NBA Finals games. Davis will work his 17th on Thursday night, the second-most in the group, followed by Capers and Brothers at 13 apiece.

Picked to work with Davis for Game 1: Goble and Williams.

More than half of the players on the Boston and Golden State rosters have G League experience.

Celtics coach Ime Udoka played in the G League — it was called the NBA Development League then — and two of his assistants are former G League head coaches; Joe Mazzulla and Aaron Miles both worked their way up those ranks. Udoka and Miles were teammates 17 years ago with the Fort Worth Flyers.

Warriors guard Gary Payton II was part of a G League title run in 2019 and was the G’s defensive player of the year last season.

The Warriors (then of Philadelphia) and the Celtics are two of the league’s original franchises, which makes this matchup seem like a fitting end to the league’s 75th anniversary season.

The Warriors won the league’s first title, beating the Chicago Stags in five games for the inaugural title awarded by the Basketball Association of America. The BAA rebranded to the NBA after three seasons.

If Golden State wins this NBA title, the Payton family gets another ring and joins a very small club.

Gary Payton won an NBA championship with the Miami Heat in 2006; his son Gary Payton II plays for the Warriors, who are four wins from this season’s title.

The other father-son duos to win rings as players, according to the NBA: Mychal Thompson and the Warriors’ Klay Thompson; Bill Walton and Luke Walton; Rick Barry and Brent Barry; and Matt Guokas Sr. and Matt Guokas Jr. 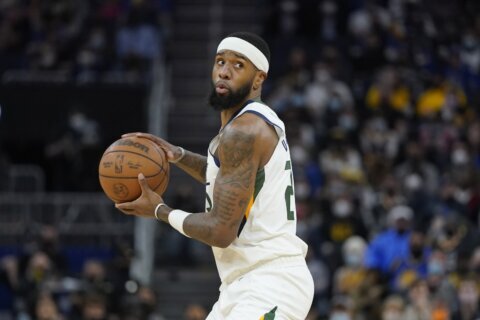 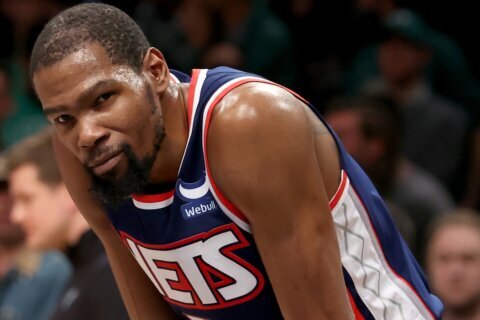 5 best fits for Kevin Durant including the Suns, Heat and Blazers