Klay Thompson shimmied his way to 32 points and the Golden State Warriors advanced to their sixth NBA Finals in the past eight seasons by beating the Dallas Mavericks 120-110 in Game 5 of the Western Conference finals on Thursday night.
Listen now to WTOP News WTOP.com | Alexa | Google Home | WTOP App | 103.5 FM
(1/17) 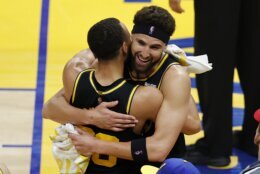 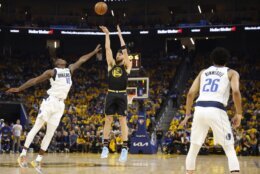 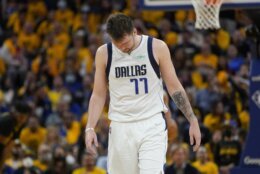 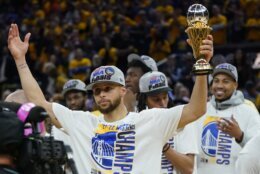 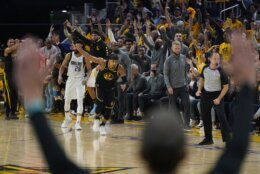 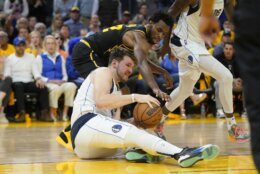 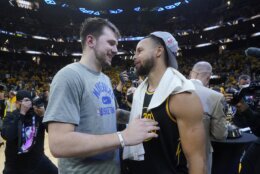 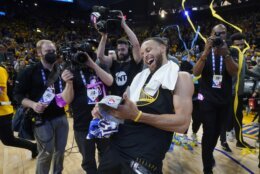 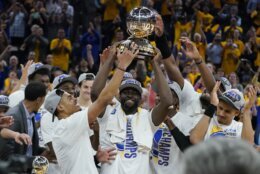 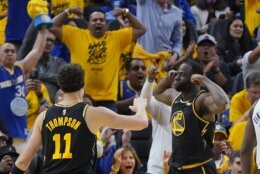 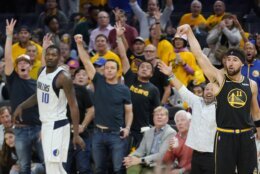 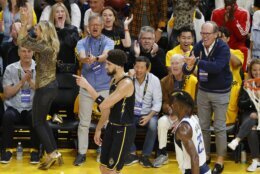 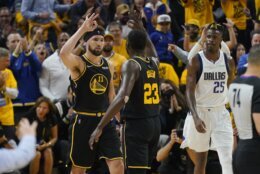 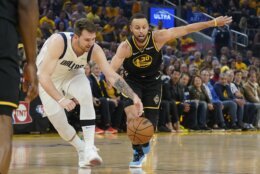 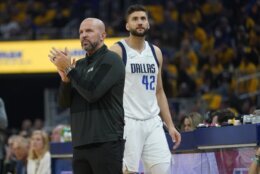 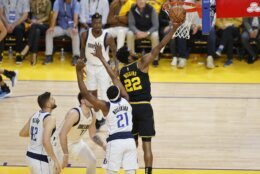 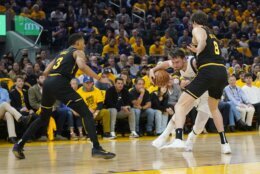 SAN FRANCISCO (AP) — As the clock ticked down the final seconds, Klay Thompson began dancing on the sideline before nearly being moved to tears during a celebration with his teammates.

After two major surgeries and two years of grueling rehabilitation, Thompson is rounding back into form and shot the Golden State Warriors back into the NBA Finals.

Thompson shimmied his way to 32 points and the Warriors advanced to their sixth finals in the past eight seasons by beating the Dallas Mavericks 120-110 in Game 5 of the Western Conference finals on Thursday night.

“It’s hard to put into words really,” Thompson said. “This time last year, I was just starting to jog again and get up and down the court. Now to be feeling like myself, feeling explosive, feeling sure in my movements, I’m just grateful.”

Thompson tore his left ACL during a season-ending Game 6 loss in the 2019 NBA Finals against Toronto and then tore his right Achilles’ tendon just before the start of the 2020-21 season. After Golden State missed the postseason in both seasons he was sidelined, Thompson finally returned to action in January.

The performance against the Mavericks showed he is getting close to returning to his old level of stardom.

Thompson scored 19 points in the first half, including a 3-pointer that he punctuated with teammate Stephen Curry’s signature shake as the Warriors raced out to a 17-point halftime lead and coasted the rest of the way.

“You could see how much was missing the last couple of years,” Draymond Green said. ”We’re lucky to have the Klay Thompson we know back because we know how good he is.”

Andrew Wiggins added 18 points and 10 rebounds, Green scored 17 points and Curry had 15 points and nine assists. He was named the MVP of the series.

After missing the playoffs in 2020 and ’21 in back-to back injury-plagued seasons, the Warriors are returning to a familiar stage. They join the Michael Jordan-led Chicago Bulls of the 1990s, Magic Johnson’s Lakers in the 1980s and Bill Russell’s Celtics in the 1950s and ’60s as the only franchises to make it to the NBA Finals at least six times in an eight-year span.

“For our team, our guys, especially the core group, to be part of that six times in eight years, I don’t even know what to say,” coach Steve Kerr said. “It just takes an enormous amount of skill and determination and work.”

Golden State will host the winner of the Eastern Conference finals between Boston and Miami on June 2 in Game 1 of the NBA Finals. The Celtics hold a 3-2 lead heading into Game 6 at home on Friday night.

The Warriors followed their pattern from the first two rounds by bouncing back after squandering a chance to end a series on the road by winning at home. Golden State is now 9-0 at the Chase Center this postseason, tying the 2017 team for the the most consecutive home wins in a single postseason in NBA history.

After making just seven 3-pointers in the first four games of the series, Thompson had eight this game for the record-setting fifth time in the playoffs.

The last two have come in clinchers the last two rounds against Memphis and Dallas, prompting the question on whether his nickname should switch from “Game 6 Klay” for his history in that game to “Clinching Klay.”

“I’m satisfied with ‘Game 6 Klay.’ I don’t need another nickname,” Thompson said with a smile. “It’s nice not having to bring him out yet.”

Thompson gave the Warriors a 13-point lead in the first half when he hit one from the corner before dancing and added two early in the third quarter for a 23-point lead.

Dallas cut a 25-point deficit down to eight in the final minute of the third quarter but couldn’t get over the hump in the fourth.

“I don’t like losing, especially not like this,” Doncic said. “I played terrible. But if we’re talking about our season, I’m really proud of this team. … Nobody had us here. But I promise we fought until the end.”

Doncic had a rough start, shooting 2 for 10 in the first quarter. His eight misses were tied for the most in the opening quarter of a playoff game since LeBron James missed all nine of his attempts in Game 3 of the Eastern Conference finals against Atlanta in 2015.

Doncic was held to six points in the first half, his lowest opening half of his postseason career, on 2-for-12 shooting before finding his stroke in the third quarter.

“We need Luka to go big a lot of nights just to give us a chance, and unfortunately the ball just didn’t go for him tonight,” coach Jason Kidd said. “I think he carries the load as well as anyone, and I think for us as an organization, we’ll help lighten that load as we go forward.”

With Otto Porter (left foot) sidelined for a second straight game, the Warriors got a big boost in the first half from 19-year-old rookie Moses Moody.

Moody scored all of his seven points in the second quarter with his 3-pointer giving Golden State a 56-38 lead. Moody scored just six points the first three games of this series for the Warriors before scoring 17 the past two games with Porter sidelined.