INDIANAPOLIS (AP) — Top-pick Rhyne Howard had a career-high 33 points — the most in any WNBA game this season — to help the Atlanta Dream beat the Indiana Fever 85-79 on Sunday.

In a matchup that featured the two top picks in last month’s draft, Howard made 9-of-18 from the field and 12-of-17 from the free-throw line with three steals.

Indiana’s NaLyssa Smith — the No. 2 overall selection — scored a season-high 18 points before leaving the game with about 6 1/2 minutes left due to a right ankle injury.

Cheyenne Parker scored eight of her season-high 11 points in the fourth quarter for Atlanta (3-1), including a layup and then an offensive rebound and putback that gave the Dream an 81-76 lead with 55.3 seconds left after Kelsey Mitchell hit a 3 that pulled Indiana — which led for just 12 seconds in the second half — within a point about a minute earlier.

Howard and Nia Coffey each made two free throws from there to seal it.

Mitchell, who went into the game averaging 20.8 points per game, third most in the WNBA this season, finished with a season-high 27 points — her third consecutive game scoring at least 24 points.

Lexie Hull, the No. 6 overall selection in last month’s draft, made her first WNBA field goal when she hit a 3-pointer early in the fourth quarter. The 6-foot-1 guard, who shot 39.3% from 3-point range last season for Stanford, missed her first 10 shots of the season. 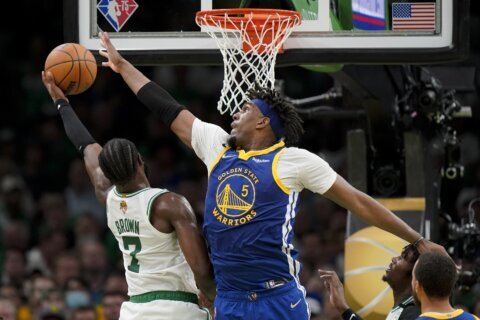