SUNRISE, Fla. (AP) — In four games over a pressure-filled week, the Tampa Bay Lightning have gone from the brink of playoff elimination to a 2-0 lead in the Eastern Conference semifinals.

Ross Colton scored with 3.8 seconds remaining, giving the two-time defending Stanley Cup champions a 2-1 victory over the Florida Panthers in Game 2 of their best-of-seven series on Thursday night.

The Lightning have won four straight since falling behind Toronto 3-2 in the first round and will look to take a commanding series lead over the Presidents Trophy-winning Panthers when the matchup moves across the state to Tampa for Game 3 on Sunday.

Colton said he was just trying not to get scored on in the final minute. He wound up being the hero when Nikita Kucherov retrieved a loose puck behind the Florida net and flicked a perfect no-look, backhand pass that Colton lifted over Sergei Bobrovsky’s right shoulder to win it.

“I was kind of trying to sit back and let the plays come to us. But when you’re on the ice with (Kucherov), you have to be ready for anything. Once I saw the puck behind the net, I just went to the front of the net,” Colton said.

“He’s got eyes in the back of his head, as you can see, because I didn’t even know he knew I was there. He gift-wrapped it for me,” Colton continued. “Luckily it just squeaked under the bar there, but unbelievable play by him.”

Florida, which had the NHL’s best record during the regular season, now has to win four of the final five games in the series to advance to the Eastern Conference final.

The Lightning, meanwhile, are playing like a team determined to become the first to win three straight Stanley Cup titles since the New York Islanders captured four in a row in the early 1980s.

“We’re two games closer to where we want to be, but we’re not there yet,’’ Lightning coach Jon Cooper said. “I told you this in the last series, and I’m going to tell you again: Tonight was just one game. We’re here to win a series.”

Florida interim head coach Andrew Brunette expects the Panthers to bounce back when the series resumes in Tampa.

“Obviously, it’s really hard. It’s not easy. This is a roller-coaster ride that were are on,” Brunette said. “The sun will come up, and we will wake up, and we need to keep playing like we’re playing.”

The Panthers scored the third-most power-play goals during the regular season, but entered the second game of the series 0 for 21 in man-advantage situations through seven postseason games.

They were 0 for 4 Thursday night, with the team’s lone goal coming on a 30-foot shot from Eetu Luostarinen that trickled past Andrei Vasilevskiy with 1:53 remaining in the second period.

“They are squeezing it,” Brunnette said of Florida’s power play. “It’s really unbelievable. I liked the urgency, thought we had some looks. I thought it was better. There was a great opportunity to capitalize.”

Bobrovsky said the Panthers have to try and forget this loss and come back ready to fight on Sunday.

“Obviously everyone is disappointed,’’ Bobrovsky said. “It was quiet, but all the guys are pros. They understand that the next game is big. We can make a difference in the future, not in the past. That’s it. We have to stay together and keep working.

“This is a good challenge for us. The whole year we have been fighting. We have found a way to come back in games, from adversities. This is another test for us. We’re just going to reset and regroup for the next one.”

NOTES: Brunette is a finalist for NHL coach of the year, as is former Panthers coach Gerard Gallant of the New York Rangers and Calgary coach Darryl Sutter — the brother of former Panthers coach Duane Sutter. The finalists were announced Thursday. … Tampa’s Amalie Arena is playing host to a concert Saturday, so the teams get an extra day off before starting a back to back with Games 3 and 4 on Sunday and Monday. … Thursday marked only the second day that the Panthers had a home playoff game on the same day that the Miami Heat — their South Florida neighbors who play about 45 minutes south — had one of their own. The first such day was Tuesday. 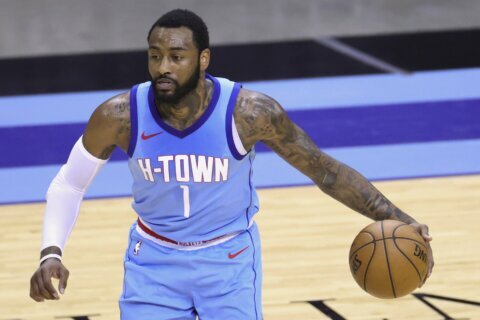